I laced up my new gray and teal hiking boots, hoping to start breaking them in on my first trek to the Jahn Wildlife Area just south of Lake Park.

Although the Dickinson County Conservation Board maintains the area in an agreement with the engineer’s office, I have only been to the property at 1624 160th Avenue once before.

My first sight was a western meadowlark, just sitting on an electrical line on the edge of the property. Then another flew into a small tree a few hundred feet ahead. A cat bird popped up out of the long grass. I turned a corner on the grassy trail and a bobolink twittled its tune from a fence post. 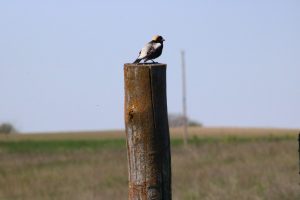 I was kind of shocked.

I had no idea that this more than 100-acre piece of property had so much life on it.

I kept walking in a rut from a county vehicle, probably one of the ATVs that was used to burn the prairie earlier this year. Bees buzzed past, birds flew around, windmills turned in the distance, grasses rustled in the breeze on the sunny day. 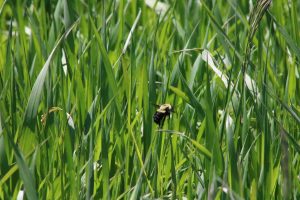 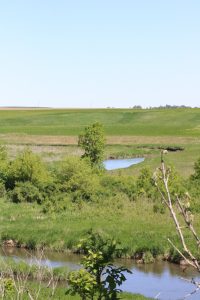 The murky water was chugging along from the weeks of rain we have had, and its waves glistened on the bright day. The green grass and trees on its banks contrasted beautifully, and the rushing river sound was peaceful. 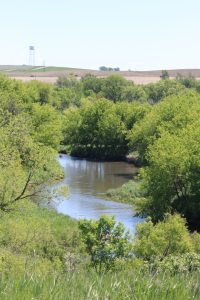 I kept walking, and the river kept churning and winding its way along. A few birds flew from a nearby tree to one farther along, trying to escape my unnatural appearance in its sanctuary.

I could no longer see where I parked the county vehicle, so I had no choice but to continue traipsing on and somehow hope that I would eventually circle my way back around.

I was walking past some tall evergreens when I heard a familiar screech. It’s the sound used for every predator bird in every movie ever made, but I knew who it really belonged to — a red-tailed hawk.

There it was. Circling above me, and then I heard a different pitch of the same scream — a second red-tailed hawk.

I watched them fly too and fro, checking me out from their heights in the cloudless blue sky.

It’s a gem of a property, only identified by a public hunting sign, so you’re almost guaranteed to be the only one out hiking. The only person that is. You’ll be accompanied by bobolinks, meadowlarks, catbirds, hawks, blue jays, bees, deer and so much more.

Let us know what you think.

(Read about walks at our other parks — like Westport Park  and Superior Marsh — on our weekly blog.)