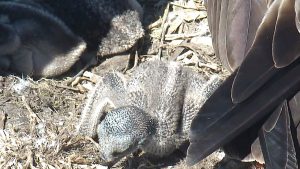 My babies are starting to grow up nice and strong.

So we don’t coddle our chicks. We teach them that they have to fight to survive. 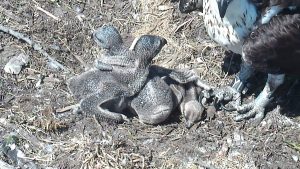 Of our three chicks, two are a little larger than the other, and my guess is that some other creatures might think that I should focus on the little one and make sure that it gets enough food to survive. However, my view is that the strong chicks are almost guaranteed survival, and the most effort should be focused on them. So the two larger chicks always get fed first, and the little one will get fed if it is feisty enough to get in their and fight for its meal. How else will it learn that getting food is not a given, that it must survive even when hungry, that it must eat to live and it must fight for its food?

Our largest chick had quite the learning lesson yesterday as well. My partner flew in to the nest with a stick in his talons, and when he landed the chick did not get out of the way like it should have. The baby’s beak was pinned between the stick my husband brought and the nest.

We continued to chat with each other as the baby laid there, stunned that we weren’t helping it. It laid there, on its back, for at least a minute. Then, realizing it was on its own, it flailed about a bit and released its beak from beneath the stick, flipped itself over and laid in the nest, panting from exertion. 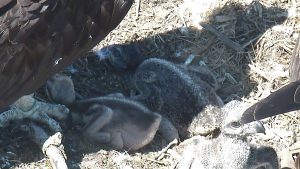 The chick learned an important lesson that no other osprey will help it. When osprey leave the nest, they are on their own. We will not take care of them when they are flying south for their first year. They must fish on their own, find a safe place to sleep on their own, get out of trouble on their own.

We only have about 55 days to raise these chicks to become the best osprey they can be. Our tactics might seem harsh, but in the wild it is survival of the fittest. And I am determined to make our chicks the fittest they can be.