It started to happen Friday, May 27. I was sitting on my three eggs, like I had been for what seemed like forever, and then I felt some movement.

I got up from my comfortable spot and rolled the eggs around with my beak, making sure that they were getting heated from each side, and I noticed that one of them had a tiny crack in it.

I nested back down on top of them and continued to feel some movement underneath me. My heart started to beat faster as I thought about the tiny little life that was about to make its way into the world. I sat tight but cheered my baby on in my head, “You can do it. I know it’s hard but keep pecking. Come on!”

My husband landed on the nest with a large stick. He continues to bring back items to make the nest safer and more comfortable for our little family, and I nonchalantly got up off the eggs, acting like I had to get out of the way for the stick he brought back.

That’s when he saw what I had just been experiencing. One of the eggs was broken halfway open and there, exhausted, lay our first chick. 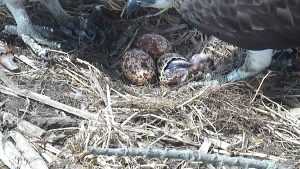 Daddy almost shrieked with surprise and joy. I knew he would be so excited to see our first little one, and I was filled with pride at the strength and vitality of this precious chick.

Our little pride and joy.

The situation repeated itself twice more in the coming days as our other two chicks hatched, healthy as can be. 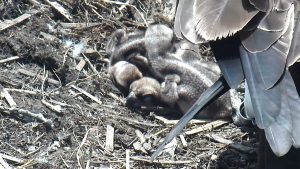 Now comes the difficult part. I thought sitting on the eggs day after day after day had been hard, but the chicks are already started to move around and demand food.

Daddy brought in a fish yesterday that I tore apart for the three babies that reached their little heads up to me, beaks open. I grabbed tiny chunks and placed them in our children’s hungry mouths, and they swallowed greedily. 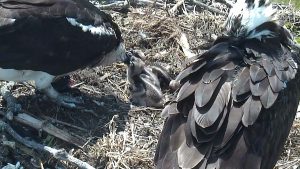 When they needed a little break from the strenuous task of eating, I would sneak a few bites for myself, and then they would reach their heads up again for more food.

After the large meal, the three babies conked out, and I nestled down on top of them again to keep them warm while Daddy took the rest of the fish away to eat. At least now he is a little more family-minded and feeds us before he chows down. That’s an improvement.

It’s a good thing my husband hangs out on the perch above our nest so often, watching out for all things dangerous. Then I can get a little shut eye. 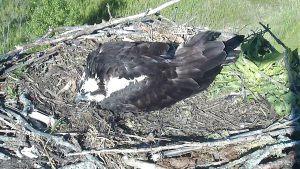