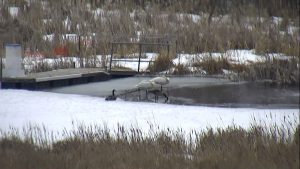 I turned on the live web camera at the nature center last week and zoomed in on the two rehabilitated trumpeter swans on the wetland.

The weather was warm, and it appeared the waterfowl were having a ball in the springtime temperatures. They dipped their necks down into the water and then bent them back up, letting the droplets rain down the rest of their bodies. They shook their feathers out and splashed around.

One climbed out of the water and stood on the edge of the ice that still covers part of the wetland at Kenue Park.

That swan started to groom itself. It would take some water in its mouth and then turn its head, ducking it underneath its top feathers to clean down deep. I noticed that the entire time it was standing on one leg, the other flat, black foot sticking out oddly behind it. I assumed that it was to help it turn better to reach more of its body to preen.

Then this week I noticed one of the swans standing with its long black foot stuck out behind it.

And today, the same thing.

So I decided to do a little research. I mean, I've heard of flamingos standing on one leg, but swans? It turns out, yes, not only do flamingoes stand on one leg by ducks, geese and swans are known to do it as well.

An article from the Savannah River Ecology Laboratory discussed a few plausible reasons that the birds do this. However, a study by two people at Saint Joseph's University in Philadelphia delved a little deeper into why flamingoes stand on one leg.

"Their study, published in the scientific journal "Zoo Biology," concluded that when flamingos are standing in water, the one-legged stance conserves body heat and that the principal reason for the phenomenon is thermoregulation. Among their statistical findings was the observation that the proportion of the pink birds that stand on one leg increases as water temperatures get cooler. Likewise, they noted that a flamingo on land is less likely to stand on one leg than one standing in water. The explanation is that having only one leg at a time in cold water reduces the rate of body heat loss. The converse observation, that most flamingos keep both legs in the water during hot weather, further supports the notion of thermoregulation."

It may not be a perfect answer, but it certainly does make sense, and it makes even more sense because the swans that I have watched do this have all been standing on ice.

I guess we will have to keep observing and see if that stands up to the rest of the year.

Two big white birds — rehabilitated trumpeter swans — live on the Kenue Park wetland, but last week we also spotted three more white birds. Egrets? Cranes? Herons? We were trying to figure out what they were but we couldn’t see their necks, because it was breezy and they had their heads hunkered down. However, END_OF_DOCUMENT_TOKEN_TO_BE_REPLACED

Trumpeter swans are a majestic sight. Their graceful long necks. Their brilliant white feathers. Their long, slender wings that help them hover above the earth. As strong as they may look, being the largest waterfowl native to North America, they are not invincible. In fact, they were once extirpated — extinct in a local region END_OF_DOCUMENT_TOKEN_TO_BE_REPLACED

It’s a big, white bird paddling on that body of water. But what exactly is it? Most likely, it’s a trumpeter swan if you’re in Iowa. The trumpeter swans is native to the state and is the biggest waterfowl native to the U.S., its wingspan reaching up to 8 feet — that’s taller than Yao END_OF_DOCUMENT_TOKEN_TO_BE_REPLACED