I hate to admit this publicly, but I had not been to Dickinson County Conservation's Westport Park until yesterday.

We are always a little surprised when people come into the nature center and have lived in the area for years without ever visiting before. However, it's the same way with county parks. Some of our beautiful gems are a little off the beaten path, and people have to intentionally visit them instead of stumbling across them, so some get overlooked.

But that's one of the reasons that I wanted to do this blog series. It lets people get a glimpse into some of our parks they may not have visited before so they will want to intentionally go there on their own or want to join us for programs at our different county areas.

I found directions to Westport Park --- take County Road A34 west of Milford about nine miles until you hit the two-way stop and then head south on County Road M27 for about a mile. Take 230th Street west a mile, and there you go.

Well, I accidentally missed the turnoff for 230th Street, so I headed west on 240th Street instead, circling back north at the first intersection.

So, I will admit that Westport Park doesn't look like much right off the bat (don't tell my boss). Go past two county gravel quarries and there is another pit filled with water surrounded by some trees. When you go there, don't let that fool you. Get out of the car.

I parked the Ford Ranger, grabbed my camera and started walking around. Take a few steps, and you almost immediately forget you're at an old gravel pit surrounded by corn and soybean fields.

It was a beautiful, windy fall day when I went to Westport Park. The wind caught the water and whirled it up into small waves. The tiny yellow leaves on the tree by the shore contrasted spectacularly with the vivid blue water, reflecting the bright cloudless sky. 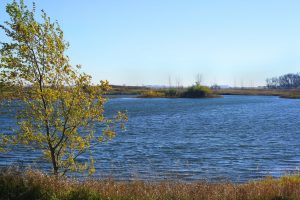 Westport Park is considered a picnic and fishing area, so the highlighted spots feature those activities. I am always drawn to the water first, as are most people in the area, so I walked down to a small dock jutting into the pond, which once produced a state record bass. 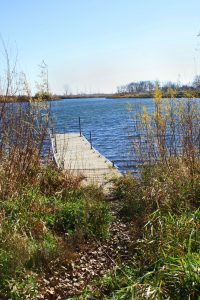 The sun shone down and warmed up the November day; its warmth is something to relish as we hesitantly come upon the winter season. The small waves rose and fell, grasping rays of light and releasing them with the movement. I love to try to capture the sun in photos, although it's often hard to do when it's shining bright. I snapped a couple of shots, hoping that the sun's rays would stop for a second as I did. 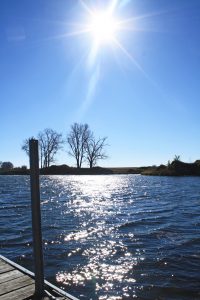 Although I could have just sat down and soaked in the warm sun, listening to the jostling waves roll past, I didn't. I turned around to explore the rest of the 10-acre park.

The tall trees lining the picnic area, complete with tables, grills and fire pits, looked a little lonely with their black, barren branches silhouetted by the cerulean sky. There was still plenty of life left in the area though. The dried leaves that had fallen from the trees rested on green grass with a few yellow dandelions still showing their bright heads, defying the change of seasons. I wonder how long they will last. 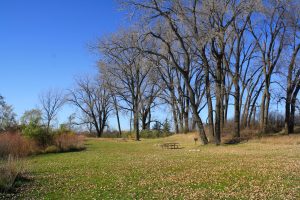 Other plants welcomed the change of seasons as seed pods split open, asking the wind to carry the fluffy seeds away to fertile soil to lay dormant until spring. 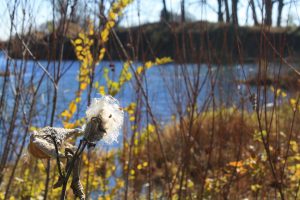 A trail circles the pond at Westport Park. If you come to fish, you can take a little break to walk around and enjoy the view, or finish up a picnic and work off those extra calories from the pop and dessert that most picnic meals include. Or just stop by on a beautiful fall day like yesterday and relax for a little while, soaking up the view of a different body of water than we're used to in the Iowa Great Lakes area.

Whatever you do, don't write off Westport Park. Some of the best places to see are a little off the beaten path. Take an extra 15 minutes and go explore. It will leave you feeling refreshed and ready to take on the next challenge. 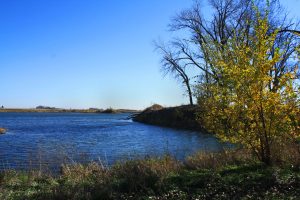 Westport Park, located in the southwest corner of Dickinson County, is a little hidden gem for those looking to spend some time outdoors. Let’s take a look at five activities you can do at one of the county’s pristine parks: Fish Westport Park was once home to a state record bass. Even if you don’t END_OF_DOCUMENT_TOKEN_TO_BE_REPLACED

So many people crest the hill on Highway 71, coming north into the south side of Milford, and get a beautiful overlook of the Milford Creek, a tributary of the Little Sioux River. But did you know that you can take a right and actually walk through part of that beautiful area? Pioneer Park Nature END_OF_DOCUMENT_TOKEN_TO_BE_REPLACED

In June 1981, Dickinson County Conservation Board entered into a maintenance agreement to refresh an exhausted county gravel pit into a county park. It started as only six acres, so small it looks like only a dot on a map of the Iowa Great Lakes area. The original document included on a 10-year agreement, but END_OF_DOCUMENT_TOKEN_TO_BE_REPLACED

A stroll through Judd Wildlife Area

At the end of summer, Snapchat had a feed where users from Iowa could post videos to share with the rest of the world. My husband and I took our dog on a walk through the Dickinson County Conservation Board’s Judd Wildlife Area south of Milford, and we took a short video of us walking END_OF_DOCUMENT_TOKEN_TO_BE_REPLACED

The scent of fall is in the air. To me the scent of fall means dry leaves, wood smoke and a hint of chill to the air. Take a breath and it awakens the spirit. My eyes open wider and search for the beautiful change of colors. My lungs take in the sweet aroma. On END_OF_DOCUMENT_TOKEN_TO_BE_REPLACED