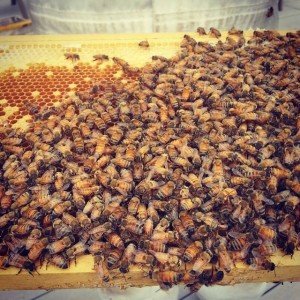 A federal survey found that beekeepers in the United States lost more than 40 percent of their colonies last year.

And the Dickinson County Nature Center was not exempt.

A board member and our director took the hive out of the nature center and opened it up, finding that the queen inside was young. Over the winter, the queen had died and a new queen replaced her. We thought it might be that this new queen just hadn’t started laying eggs yet.

However, time soon told a different story. The hive continued to decline, so upon further inspection it was found that it was without a queen at all.

A new and already successful hive was purchased and put inside the nature center’s indoor hive display, and these bees are now happily buzzing about and doing their work.

Bee hives decline for a variety of reasons. Bees are struggling to find habitat and food sources as native flowers are being taken away. Diseases are becoming more common, and pesticides are also harming pollinators.

(Read about how neonictinoids may be affecting bees.)

The Obama administration has put together a plan to help reverse the declining bee and monarch butterfly populations throughout the United States by making federal land more bee-friendly, by spending money on research and considering the use of fewer pesticides.

People can also make a difference in their own yards by planting pollinator-friendly native plant species, by reducing the use of pesticides and by providing habitat in the form of bee homes.

(See instructions how to make a bee home.)

Come to the nature center to learn all about honeybees and native bees and how you can get involved in helping increase all pollinator populations.

(Check out the first in the native bees series.)