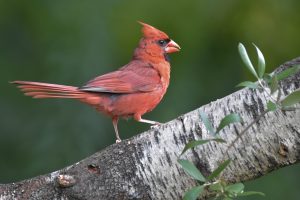 The Northern Cardinal is many people’s favorite bird. It’s one of my favorites and is the state bird of seven different states. Not to mention the mascot of countless sports teams, schools, and various other organizations. But what makes them such a favorite? It’s an easy answer, their red feathers.

Cardinals don’t migrate so if you’re lucky, you can catch a glimpse of one standing out against the snow. They don’t molt either, so they are hard to miss with their bright red feathers in the winter. During the spring, they can be heard singing as spring gets closer. They can be seen on the edges of forests or in dense shrubby areas.

They are a common bird feeder bird as one of their favorite foods is the black oil sunflower seeds. They also enjoy common fruits and seeds such as sumac, blackberry, hackberry, and corn. They will also eat insects and when they have babies in the nest, they will feed them almost exclusively insects.

The Northern Cardinal can be seen hopping on low branches or foraging on the ground. If not there, they could be high up in a tree or on a tall shrub branch singing and preening. They are often seen with groups of other birds such as Goldfinches, Sparrows, and Dark-eyed Juncos. They are all common feeder birds and thrive around human development.

Cardinals have short, round wings so you won’t catch them soaring through the air but might be able to see them flying from one shrub to another. They are reluctant to fly due to their shorter wingspan. In the spring during breeding season, these birds are fierce protectors of their territory. This means they might attack their reflections in windows, car mirrors or even other shiny parts of a car. As their breeding hormones subside, these attacks should stop. 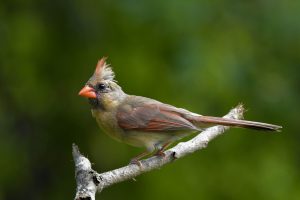 Fun fact about cardinals, despite being the lesser-known cardinal, the female cardinal is one of the few songbirds in North America who sings. Females sing while sitting on the nest to communicate with their partners. According to the Cornell Lab’s All About Birds, Northern Cardinal page, the females sing to let the males know when to bring food back to the nest.

Northern Cardinals are beautiful birds and we should be hearing them sing more often as spring approaches. Watch your bird feeders and let us know what you see!