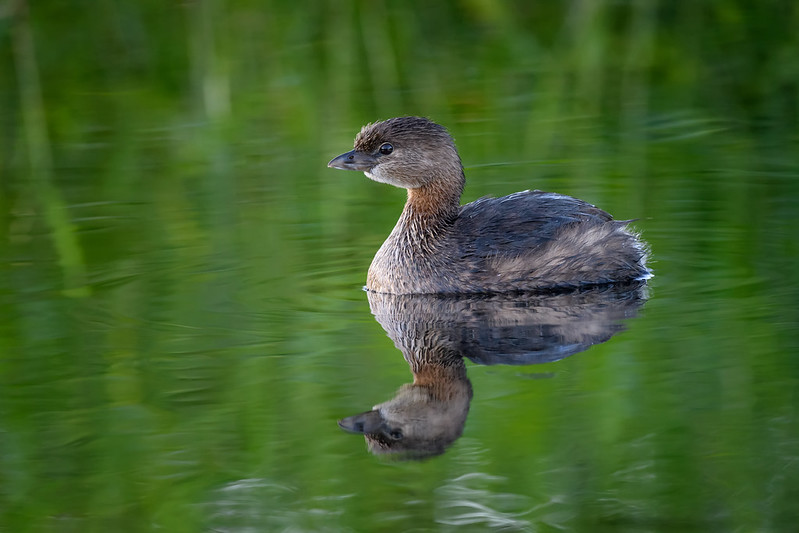 If you see a duck but aren’t quite sure what type of duck, it might be a pied-billed grebe. These aquatic diving birds are found throughout Iowa during the time they are breeding. They are brown and black but have a light-colored underside. They look like small ducks but have a more rounded shape. They also have a light-colored beak with a black line in the middle. Their beak is short and curved at the end to provide the best way for them to eat.

The pied-billed grebe eats mostly crustaceans and small fish. This is why they need the curved beak for foraging. They catch their food during dives, so they eat things like snails and mussels with shells. They most likely ingest parts of the shells, but they have evolved to ingest these. They also eat their own feathers. So many to fill up half their stomachs. They do this to form a “plug” that stops the hard prey parts, like shells, from passing into the intestines. Once ready, they throw up this clump of feathers and hard prey parts much like an owl pellet.

These aquatic birds live on open water such as lakes, slow-moving rivers, and wetlands. All of which we have around here so it wouldn’t be uncommon to see the pied-billed grebe. They live, nest, and eat around vegetation. They especially like the floating vegetation for their nests. They tend to nest on a platform of vegetation floating in water 9 inches or deeper. This allows for feeding grounds right off the nesting site and will be in taller vegetation for safety. The floating platforms tend to be made of materials such as water lilies and stems that float. 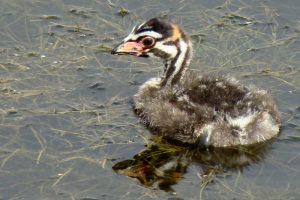 In each bowl-shaped nest, a female will have between 2 and 10 eggs. Breeding begins in May and runs through July. The babies hatch with downy feathers but soon leave the nest to ride around on the parents’ backs for the first week. When the adults dive for food, the babies are clamped under their wings. Not only do they do this to catch food, they do this for protection. Most predators won’t follow them underwater so they dive to safety.

As adults, they can also sink straight down and leave no trace. They will also sometimes stay submerged like a crocodile and only their eyes and nostrils are above water. These grebes are serious about their safety.

If you’re out looking for the pied-billed grebe between May and July, make sure to keep an eye out for their fluffy babies riding on their backs. Don’t scare them though because otherwise, they might just dive and you won’t see them again.