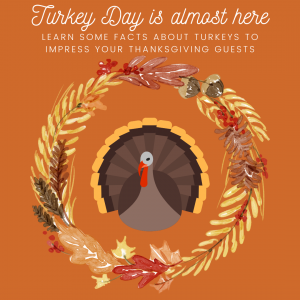 Since Thanksgiving Day is almost here, I thought it would be fun to look at the history of Thanksgiving and how turkeys became the focal point.

Every year for Thanksgiving, there are around 46 million turkeys eaten across the U.S. But how did this come to be? Why do we eat turkey on Thanksgiving?

At the first Thanksgiving celebration in 1621, there are accounts by Edward Winslow mentioning the wildfowl at the feast. But Thanksgiving wasn’t deemed a national holiday until 1863 when Lincoln declared it one.

There’s a reason the annual Thanksgiving 5K is called a Turkey Trot. That is what they used to call the turkey walks where the turkey drovers would take their turkeys to market. Turkeys are a strange bunch because on these journeys if they went through heavily wooded areas, the shade from the trees would make the turkeys think it was nighttime and they would stop for the night according to Kathleen Karr who wrote The Great Turkey Walk.

There were other foods at the “first Thanksgiving” such as other birds like ducks or geese, mammals such as deer, and corn in various forms which is where we get all of our sidedishes. But those too have changed over the years. Green bean casserole, stuffing, pumpkin pie, and cranberry anything are all common side dishes found on the table. One thing that has stayed the same is the corn. Some variety of corn seems to always grace the table.

As it seems, even with research, the link between Thanksgiving and turkey seems to stem from many different places. That’s the thing with history, sometimes it’s straight forward but other times it’s a bit controversial. Either way, at least 46 million turkeys are eaten across the U.S. and if you’re someone who likes the tradition, you’re in luck because it doesn’t seem to be going anywhere. 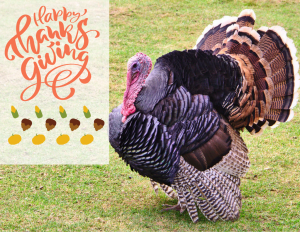