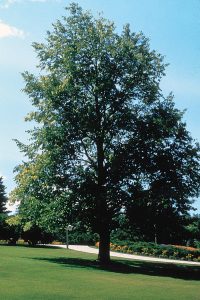 We love trees for many reasons.

They give us shade. They're beautiful. They are homes and food sources for a variety of animals. Plus, they give us clean oxygen to breathe!

To eat, trees go through a process called photosynthesis. To do this, their leaves pull in carbon dioxide and water through tiny pores, called stomata, and use energy absorbed from the sun to turn the CO2 and H2O into sugars.

During that process, the tree releases 02, which is oxygen, from the leaves' stomata.

The process of photosynthesis occurs in the green parts of the leaf and stem, called chloroplasts. That means that trees do most of their work taking in carbon dioxide and releasing oxygen when their leaves are green, which is during the spring and summer.

As fall arrives and leaves change color, they can no longer do photosynthesis. Some trees with green stems are still able to do some synthesizing of carbon dioxide into sugars, mostly utilizing carbon dioxide that they give off themselves.

Trees also utilize oxygen when they break down the sugars they have created during photosynthesis to use for energy. However, they release more oxygen than they use up, so that they provide enough oxygen for you and me to breathe.

If you love pollinators as much as we do, you’re always looking for plants to add to your landscaping that can help provide habitat and food sources. Our pollinator populations are dwindling, and it’s up to us to bring them back. You can truly make a difference even with small pollinator plots at your own END_OF_DOCUMENT_TOKEN_TO_BE_REPLACED

Crafts don’t always come together the way you think they will. I had a brilliant idea this morning to make place cards with leaf etchings on them, and I tried it out. Yikes. Ugly. If you come up with something pretty with that idea, let me know. So instead, I decided to post how to END_OF_DOCUMENT_TOKEN_TO_BE_REPLACED

Fall is the time of year to look at leaves. We pick them up and marvel at colors. We rake them up in the yard. We jump in the piles and toss them in the air. But what kind of leaf are you looking at? We have put together a list of different kinds of END_OF_DOCUMENT_TOKEN_TO_BE_REPLACED