Iowa has 28 different species of snakes, including four venomous species.

(Read about the venomous snakes of Iowa here.)

Most people are familiar with the garter snake, a common type of non-venomous snake, which are harmless to humans.

Let's take a look at the two kinds of garter snakes that are native to Iowa: 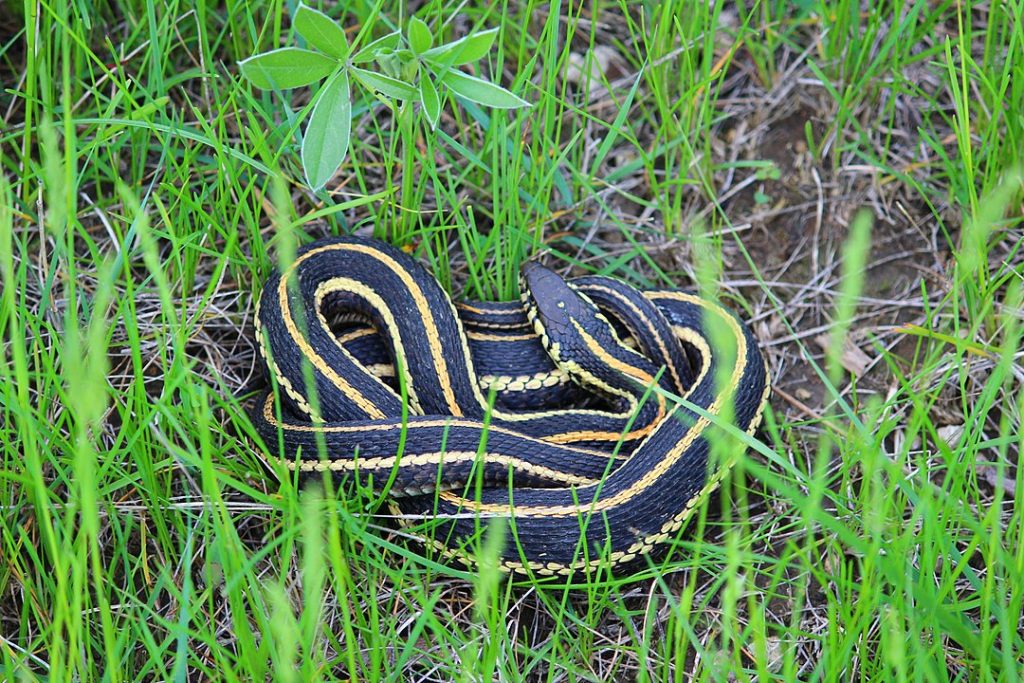 These garter snakes are found throughout Iowa and can range quite a bit in appearance. They measure 14-43 inches in length and typically are brown or black with two alternating rows of black spots. However, some are actually olive green instead of brown or black, and some even have red on the sides.

When scared, the plains garter snake will give off a foul-smelling odor and will expel excrement to get predators to leave it alone. It may also hide its head and raise its tail, shaking it back and forth.

Plains garter snakes are diurnal, which means they are active during the day, and they are found in a wide variety of dry areas. You might see them in a prairie, in a grassy area like a park, in your backyard or by a forest.

These garter snakes are not constrictors, so they eat whatever they can overpower with their jaws --- worms, amphibians, mice and bird eggs. They may also eat dead animals that they find. 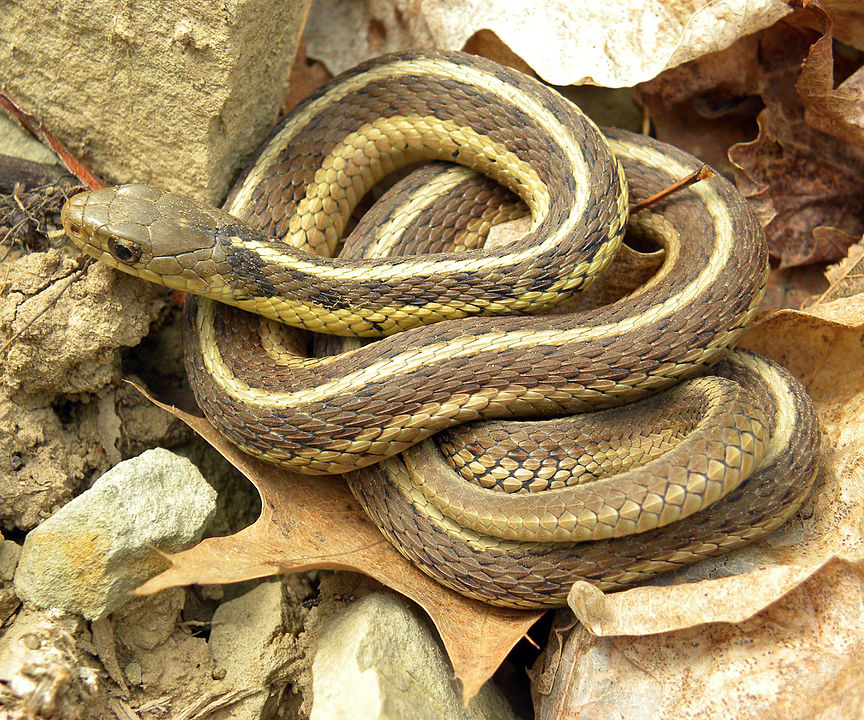 The common garter snake looks very much like the plains garter snake and is about the same size, growing 14-48 inches in length.

It has three longitudinal stripes on a brown or black body and can also have red on its sides or belly.

The common garter snake may be more aggressive than the plains garter snake. It also releases a bad-smelling musk, but it is more likely to bite --- a non-venomous, usually painless bite.

Like the plains garter snake, these garter snakes are not constrictors, so they eat whatever they can overpower with their jaws --- worms, amphibians, mice and bird eggs. They may also eat dead animals that they find.

The common garter snake (Thamnophis sirtalis) is just that — common. They are a small snake, usually less than 3 feet, and are non-venomous. The snakes are found throughout Iowa and much of the U.S., as far south as the Gulf of Mexico. However common they are in the summertime, they quickly disappear as the END_OF_DOCUMENT_TOKEN_TO_BE_REPLACED

Kids learn pretty early that animals that are awake at night are nocturnal. The word for the rest of us that are awake during the day, though, doesn’t seem quite as well known. Humans and many animals are what is called diurnal. Diurnal creatures wake and sleep with the rising and the setting of the END_OF_DOCUMENT_TOKEN_TO_BE_REPLACED

Can she do it? Community relations coordinator attempts to hold a snake for the first time

From not being able to shelve any books with snakes on them while working at a library as a teenager to holding a snake — community relations coordinator Kiley Roth has changed a lot! See her first time holding a snake and perhaps learn how to overcome your own fear with this video! Check out END_OF_DOCUMENT_TOKEN_TO_BE_REPLACED

If you find a snakeskin in the wild, it’s usually inside out! When it sheds, it slithers out of its old skin, like pulling a sock off your foot, so it ends up inside out! Watch the video for more information on how and why snakes shed their skin. Check out more of our animal END_OF_DOCUMENT_TOKEN_TO_BE_REPLACED

Crafts are so much more fun when the end result is actually something to play with rather than just hang on the refrigerator. This paper chain snake that can slither and wiggle is an easy and interactive craft for the snake lovers out there. And if you don’t have snake lovers, call it a caterpillar END_OF_DOCUMENT_TOKEN_TO_BE_REPLACED

Since this week’s blog post was about how snakes slither, I thought it only appropriate that this week’s craft also be snake related. I will pretty much guarantee that after you make this fun wrist cuff that your child will not take it off for the entire day. Or at least the next five minutes, END_OF_DOCUMENT_TOKEN_TO_BE_REPLACED

Besides their forked tongues, probably the main thing that creeps people out about snakes is their ability to move without legs or feet. (The reason a snake sticks out its tongue, and why it’s forked.) I have to say, before I started working at the Dickinson County Nature Center, back when I was still petrified END_OF_DOCUMENT_TOKEN_TO_BE_REPLACED

Why do snakes stick out their tongues at you? Have you ever seen this? You’ve been looking at one of the snake animal ambassadors at the nature center, and one of them sticks out her black tongue and flicks it around. She is smelling you! The snake’s tongue has a fork on the end of END_OF_DOCUMENT_TOKEN_TO_BE_REPLACED