The augmented reality sandbox in the Dickinson County Nature Center has been a hit since it was installed.

What is a watershed?

A watershed is an area of land that drains into a lake, river or other body of water. Watersheds are separated from one another by higher parts of the landscape such as a ridges, hills and mountains.

How does water move through the watersheds in the Iowa Great Lakes? 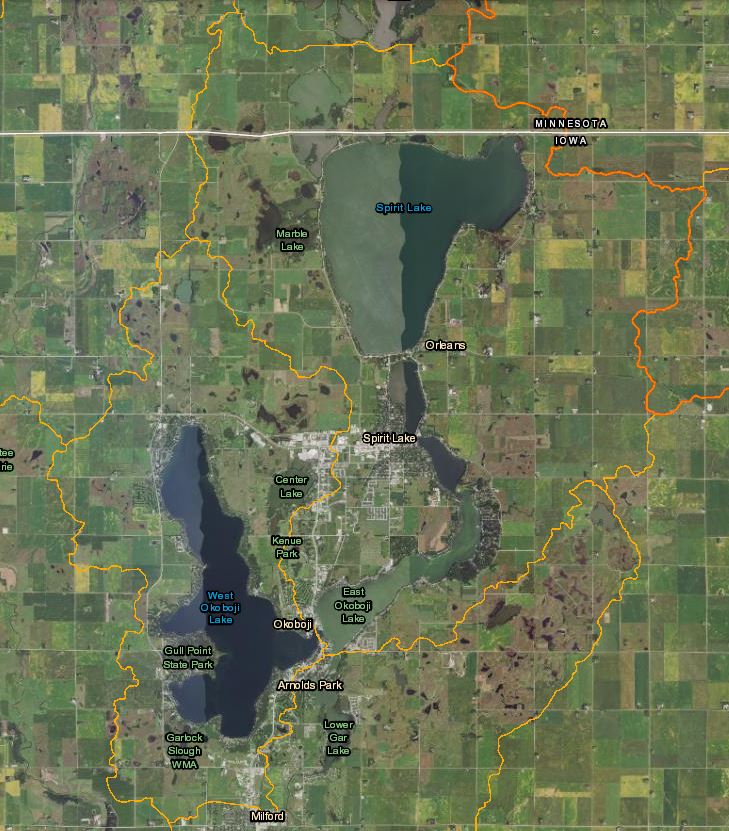 In the map from the Iowa State University GIS Facility, the yellow and orange borders show the watershed area that feeds each lake.

How does precipitation add water to watersheds?

Learning about watersheds begins with the water cycle, because the flow of water is a neverending cycle.

Once rainwater runs off into rivers and other bodies of water and combines with groundwater, energy from the sun evaporates the water into the air. Atmospheric winds move that water vapor around until it combines to form clouds. In those clouds, the water vapor cools and condenses into liquid water. When that water gets heavy enough, it falls to the earth, producing precipitation such as rain or snow.

Then the cycle starts all over again. 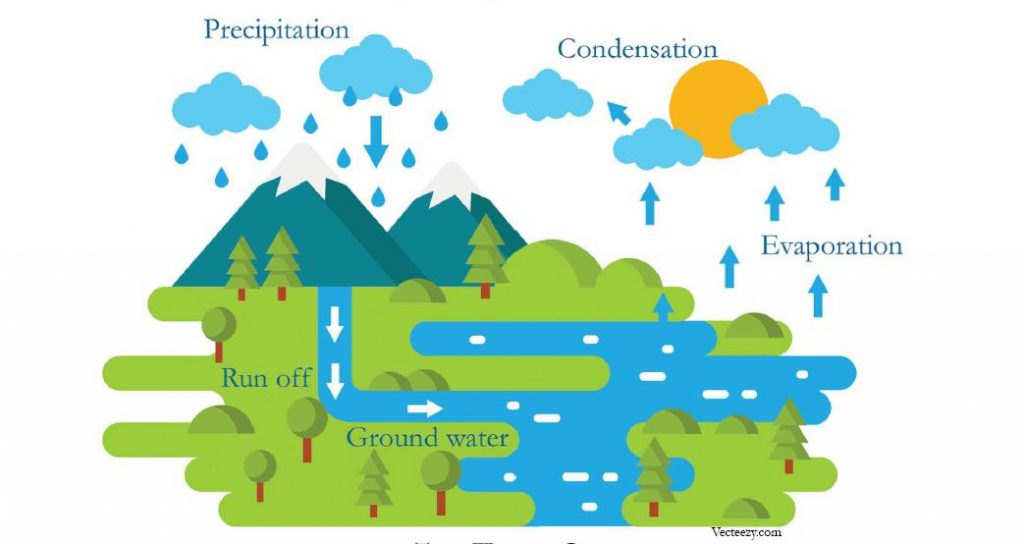 How does what is on the land affect the watershed?

How land is used can affect water quality in a watershed. We've all seen algae blooms on lakes and streams from excess nutrients or massive scale fish kills from water contamination.

In suburban areas, precipitation that falls on hard surfaces such as parking lots, buildings, roads and driveways will run off directly into the sewer system and then into bodies of water, carrying with it oil, fertilizer, sediments, bacteria and pesticides.

Precipitation in rural areas often runs off from crop fields and stockyards directly into streams and rivers, carrying with it fertilizer, pesticide, large amounts of soil and livestock waste.

Erosion can also harm water quality as loose stream and lake banks begin to leech soil into the water, sometimes even completely filling in a stream or riverbed.

7 reasons why the IRVM program is important to Dickinson County

Iowa was one of the first states to establish an Integrated Roadside Vegetation Management program. Since its inception in the 1970s, more than 50,000 acres of federal, state, county and city roadsides have been planted to native grasses and wildflowers. (Read about the state program here.) Dickinson County began its IRVM program in 2015, and END_OF_DOCUMENT_TOKEN_TO_BE_REPLACED

Native prairie plants make wonderful habitat for wildlife like voles, turkeys, rabbits, ground squirrels, hawks and foxes. They provide both habitat and food sources for tiny creatures such as monarch butterflies, bumblebees and milkweed beetles. They are beautiful to look at. However, they are also important in a way that we can’t see. Deep down END_OF_DOCUMENT_TOKEN_TO_BE_REPLACED

The frozen Iowa Great Lakes are dotted with blue and black as ice fishermen set up their shacks, drill holes and search for life below the ice. And there is still plenty of life to be found, but how exactly do fish survive in those frigid temperatures? You can learn how ice is created on END_OF_DOCUMENT_TOKEN_TO_BE_REPLACED

We all love the lakes. That’s what makes Okoboji, Okoboji. But how much do you know about the lakes themselves? Did you know that Upper Gar Lake is the smallest lake in the Iowa Great Lakes at only 37 acres with an average depth of 3.5 feet? That is the height of the average 6-year-old! END_OF_DOCUMENT_TOKEN_TO_BE_REPLACED

The temperatures drop, and we all wonder, “When will the lakes freeze?” My question today was, how does that actually happen? Of course, ice is created when the water temperature reaches freezing. That is pretty obvious. We’ve all seen ice cubes created in the freezer. Yet, lakes don’t freeze all at once, and they don’t END_OF_DOCUMENT_TOKEN_TO_BE_REPLACED