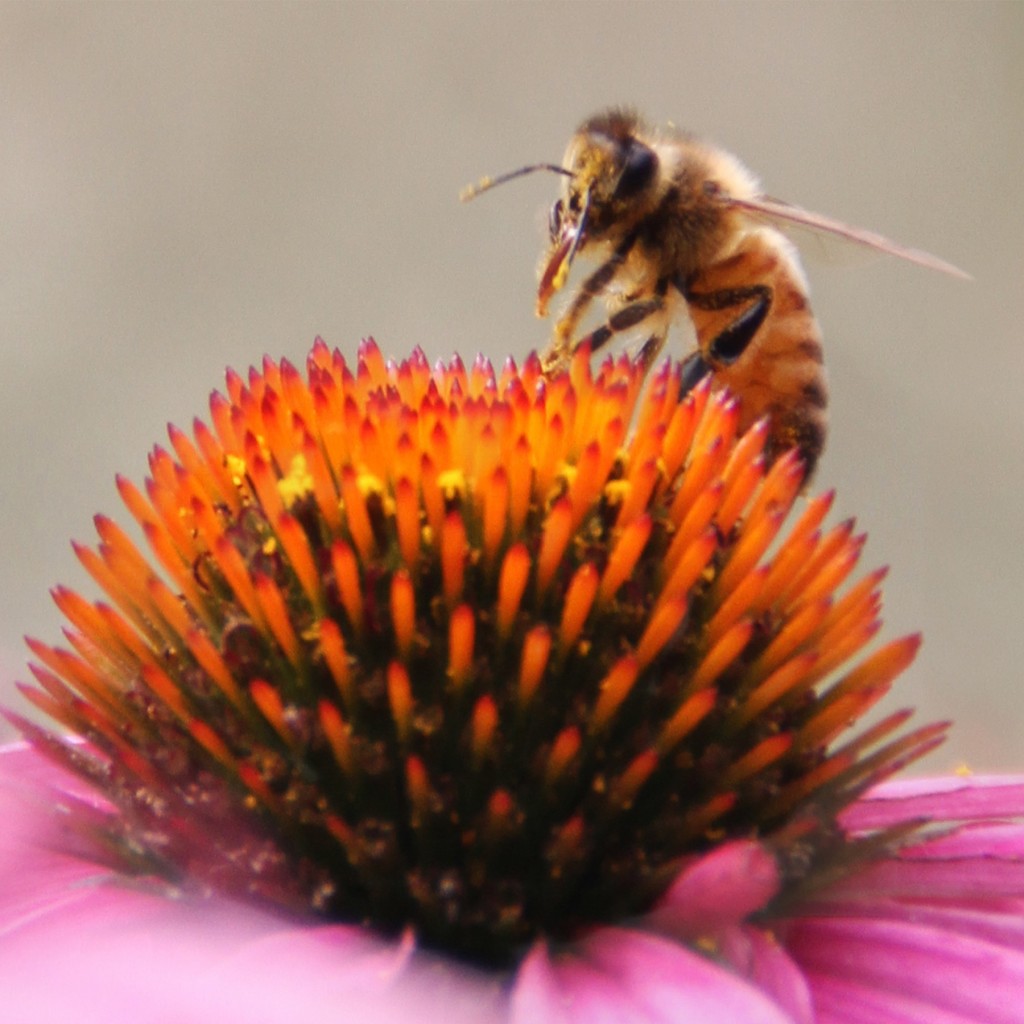 A worker bee typically lives six weeks during the summer, and during that time it has a variety of different jobs — nurse, undertaker, architect, cleaner, attendant, guard, forager. (Read more about worker bee jobs here.) However, worker bees that live in the wintertime have a longer lifespan and can live up to six months. If they couldn’t survive longer, they would all die, because the queen doesn’t lay eggs in the winter. In the spring, when the queen begins to lay eggs, the overwintering workers transform back into “job mode” and start their typical six-week lifespan. (Read about overwintering bees here.)

A queen bee lives anywhere from one-five years, and a drone lives about six months. However, a drone dies after he mates with another queen, so his lifespan could be much shorter.

2. How can you tell the difference between a worker bee, drone and queen bee?

A worker bee is the typical bee that you would see, and the queen looks similar except her abdomen is about twice the length of a worker. This allows her to drop her abdomen into a honeycomb cell to lay an egg at the bottom. A drone bee is larger than a worker and is fuzzier. 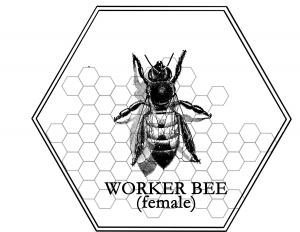 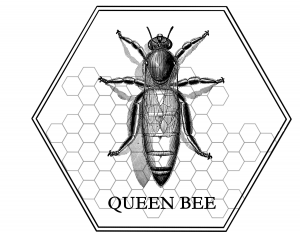 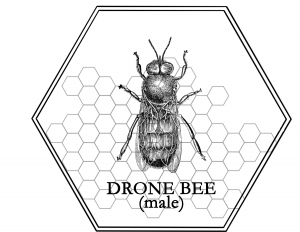 3. How do bees carry pollen?

A honeybee carries pollen in specialized sacs on its hindlegs. You might have seen one with bright yellow packets of pollen on its legs as it returns to a hive from foraging. Many native, solitary bees are covered in stiff hairs to which pollen sticks. These bees can carry pollen all over their bodies, depositing it and helping with pollination as they move from flower to flower. 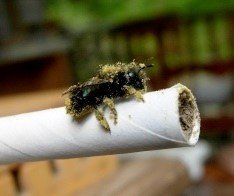 4. What are flowers that bees like? How can I help bees?

It boils down to the fact that bees and other pollinators like native flowers — because that is what they are adapted to — that are bright, fragrant and have easily accessible and ample nectar. You can plant a pollinator garden in your yard or help support large pollinator plantings in the community. It is best to plant a variety of flowers, because different species are attracted to different species of flowers, and to plant flowers that bloom from early April through October. This allows for habitat and food throughout the growing season.

5. What is a native bee? Aren’t all bees native?

A native bee is a species that is indigenous to an area. These are bee populations that have always live in North America. Native bees are typically solitary, meaning they only get together to mate, and do not sting humans.

Honeybees are actually not native to North America. The European honeybee (Apis mellifera) originated in Europe — or some say northern Africa — and was only brought to North America by settlers for honey production. The vast majority of these bees are still domestic, although some have escaped and established wild colonies, called feral colonies.

(Read more about the differences between native bees and honeybees here.)

6. How many types of bees are there?

Of the approximately 4,000 native bee species in the United States, almost 300 species are native to Iowa. Studies are continuously being done and more native bees are being found, so that number is not final.

Honeybee and native populations have been dwindling in the past couple of decades due to a lack of native habitat, food sources and overuse of pesticides, insecticides and fertilizers. Insecticides with neonicotinoids have especially been found dangerous to pollinators of all kinds.

The issue of neonicotinoids comes in when they reach beyond their intended targets. The insecticides can spread as dust, spray drift and can get into waterways where the chemicals are taken up by plants through their roots and spread into all plant tissues, including pollen and nectar. The chemicals are very hardy, persisting in soil for years after application, in woody plants up to six years and some untreated plants will absorb residue from a previous year. These residues are then consumed by pollinators, including honeybees and native bees. (Read more about neonicotinoids here.)

More issues are also being discovered, such as colony collapse disorder, and even invasive species such as varroa mites are killing off colonies of honeybees. (Read more about an infestation of varroa mites at the Dickinson County Nature Center here.)

9. Which bee is the best pollinator?

Mason bees might be the best pollinators of all bees. Instead of wetting pollen and putting it in pollen sacs like honeybees, mason bees are covered in hair that collects pollen as they move around, searching for nectar. They can certainly carry a lot of pollen and significant pollinators for apple, cherry and plum trees.

However, mason bees still can’t pollinate all flowers. About 8 percent of flowering plants have pores or valves that seal the pollen in, because it is costly in energy for the plant to produce, and these plants try to conserve energy by conserving pollen. The tube-like anther is only accessible through a small pore at the tip. The pollen inside cannot escape the male anther to fertilize female stamen in its species unless a bee opens up that valve or pore to get to the pollen. 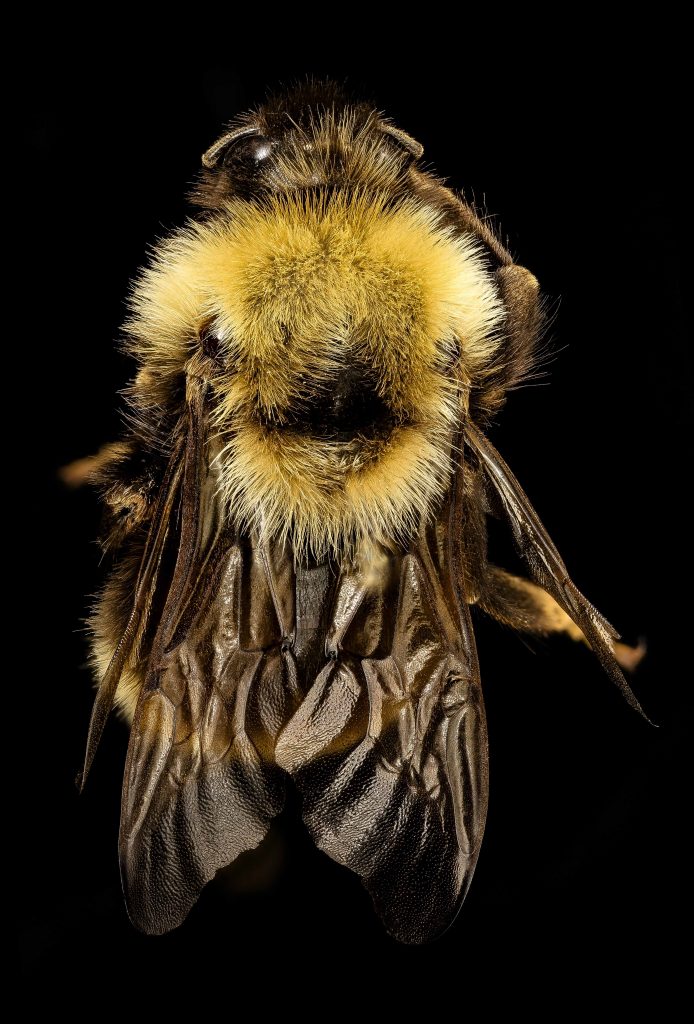 A sonicating bee, such as those in the Bombus genus of bumblebees or the Xylocopa genus of large carpenter bees, lands on a flower with sealed pollen. It will detach its wings from its flight muscles, tucking them into a resting position along its thorax, and will grab hold of the anther with its forelegs and mandible (or jaw). Using its incredibly strong flight muscles, it will begin vibrating the anther.

These high frequency vibrations will cause the pollen grains in the anther to bounce up and down, gaining so much energy that they blast out, sometimes in a visible cloud. The pollen coats the bee, which wants the pollen to take back to the nest as a protein source for its offspring, and also floats around and lands on stamens, fertilizing them. The bee will also lose grains of pollen as it goes from flower to flower, also completing the pollination process to help plants make seeds.

What if you couldn’t have any almonds or cashews in that nut mix you love to snack on?

What if you couldn’t eat sesame chicken because sesame didn’t exist anymore?

What if bananas, blueberries and tomatoes weren’t on the shelves anymore?

One in three bites of food that we take is due to pollinators, and some of your favorite foods are probably on the list of crops that would be gone if our pollinators vanish due to lack of habitat, food sources and climate changes. So let’s make a difference in the environment, and let’s work together to save bees and all our pollinators!