You may have noticed that as the seasons change, birds begin to look different. What was a bright eastern goldfinch in the spring becomes a duller hue in the winter. A duck that had vibrant breeding feathers earlier in the year now looks a little drab.

That is because birds molt. Their feathers wear out due to the natural elements and bacteria and have to be replaced regularly or the birds wouldn't survive. 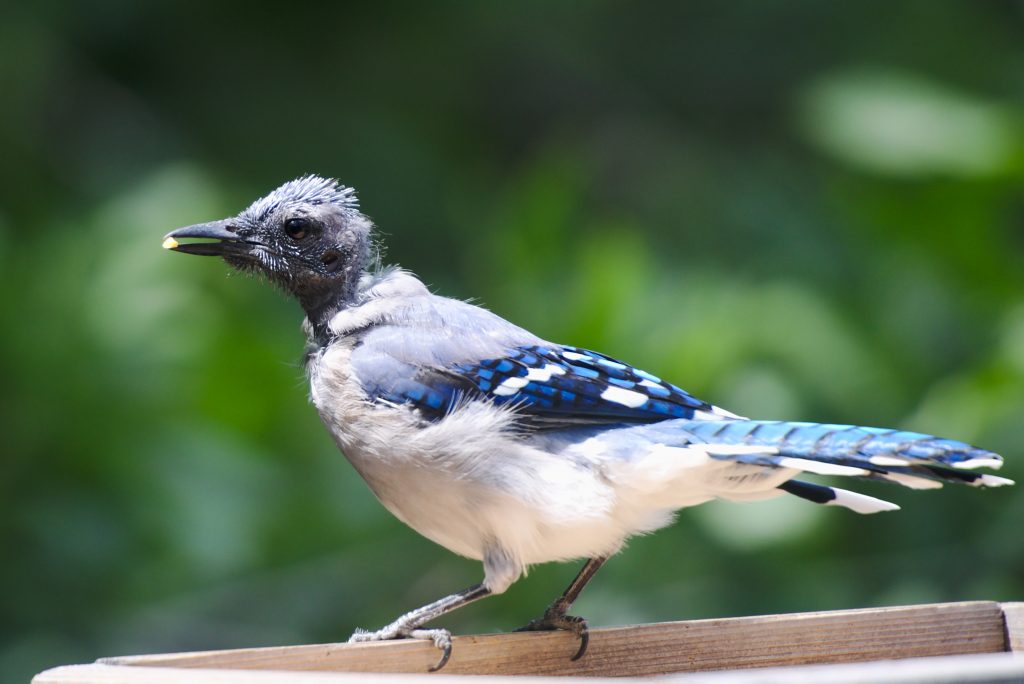 Photo of a molting blue jay by Thcipriana, via Wikimedia Commons

We wouldn't wear the same clothes every day, would we? Those clothes would wear out. Well, the same things happens to birds' feathers.

Molting timetables are different for every bird species and usually occur during times when food supply is at its greatest since most birds will be unable to fly for about two weeks as they molt. All birds molt annually, but some also molt parts of their body feathers more than that. Only two North American bird species have been found to undergo two complete molts per year --- Franklin's gull and the bobolink.

What stimulates molt is quite unknown to scientists and can have to do with bird hormones following breeding season or even a decrease in daylight length as summer ends and fall begins. Birds wouldn't molt their main wing feathers during migration because it could be harmful to their travels, but whether they molt before or after migration depends. According to "Molt in North American Birds" by Steven N.G. Howell, birds that migrate a short distance tend to molt at their breeding grounds before heading south, and those with a longer distance to travel will wait until they arrive in their overwintering areas. However, some do buck the trend and molt at a certain site during migration where they expect ample food will be. 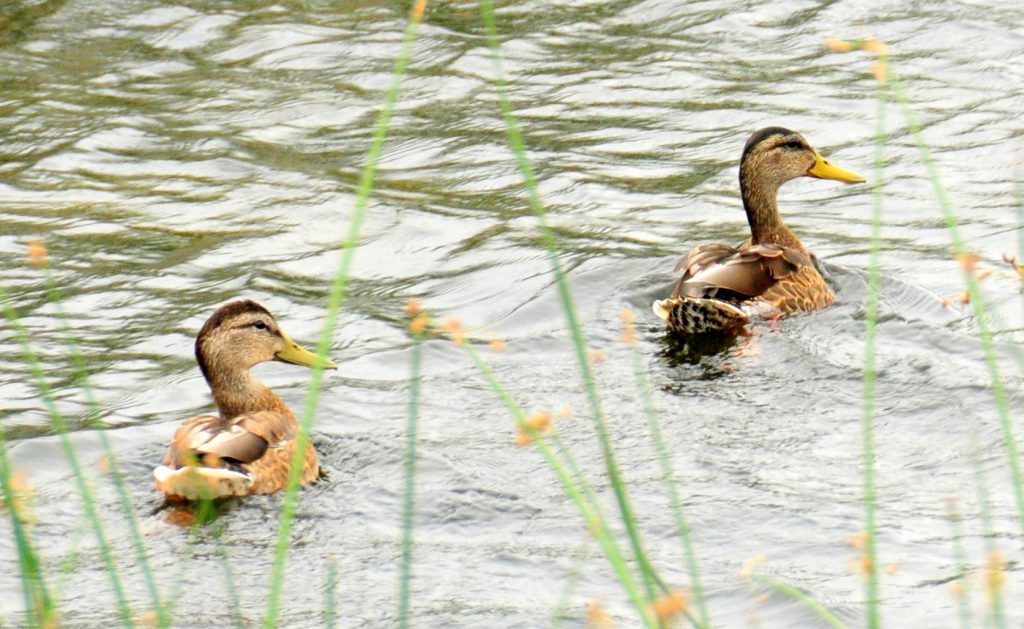 After the breeding season, mallard drakes molt into an eclipse plumage. They become unable to fly as wing feathers are molted and typically hide in dense wetland vegetation until they can fly again. They appear much like a hen mallard with more camouflaged tan feathers, but their yellowish green bill color remains. The drakes begin to molt back into their breeding plumage of a green head , chestnut breast, and grey flanks by late summer. Photo: Tom Koerner/USFWS

There are two keys to identifying a bird in molt. The first is by gaps in wing feathers, which can be seen well when a bird is in flight. Another way is by the differences between feather colors. A bird in active molt may have clean and crisp feathers that contrast with drab, dirty, old feathers. 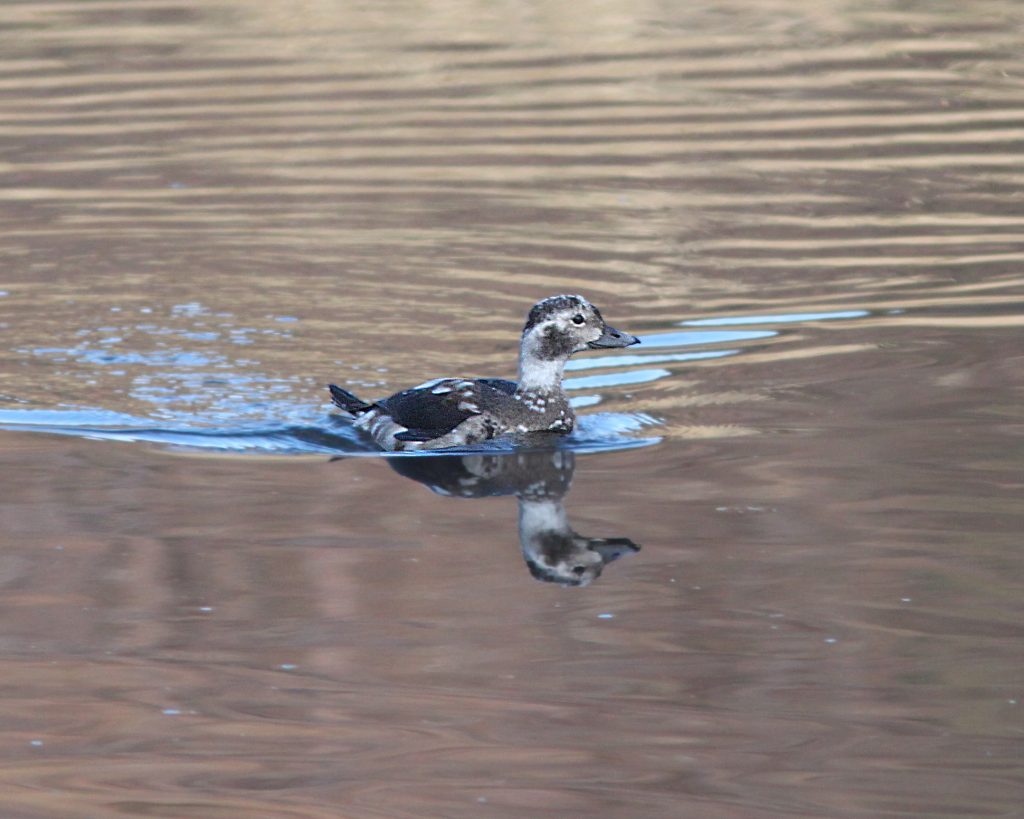 A long-tailed duck in partial molt. Photo by Alan Schmierer, via Wikimedia Commons

Each year, since I was a little kid, my mom and I take guesses about when we will see the first robins of the year. Now that I live in northwest Iowa and she lives in eastern Iowa, she usually sees them first, so I usually guess earlier than I would expect to see them END_OF_DOCUMENT_TOKEN_TO_BE_REPLACED

You might start seeing migrating birds even when it seems winter still has its grip on the world. Different species of birds decide to migrate based on different factors, such as day length, temperature, food availability and genetics predisposition. For waterfowl, it begins with daylight. Over the winter, waterfowl eat plenty of high-fat foods to END_OF_DOCUMENT_TOKEN_TO_BE_REPLACED

We have many wonderful volunteers at the Dickinson County Nature Center, and one of regular front desk helpers loves to bring in articles with interesting animal facts. The last article she brought in from “Smithsonian” magazine told that the highest bird flight ever recorded was by the Ruppell’s griffon, a vulture native to Africa. It’s END_OF_DOCUMENT_TOKEN_TO_BE_REPLACED

The Iowa Great Lakes and the smaller lakes and wetlands in the area are starting to melt. That means that birds that flew south to warmer areas for the winter are now flying back north to their summer breeding grounds. Waterfowl are definitely on the move this month, and it’s fun to see the birds END_OF_DOCUMENT_TOKEN_TO_BE_REPLACED