We get a lot of questions at the Dickinson County Nature Center, and a lot of them have to do with butterflies and bees.

Let's take a look at some of our most commonly asked questions about monarch butterflies.

How long do monarch butterflies live?

A monarch is in the egg stage for three-five days, is a caterpillar 10-14 days, is in chrysalis 10-14 days and lives two-six weeks as an adult. (Read about the life cycle here) Fall monarchs are different, because they live about six months. These butterflies do not reproduce right away but instead fly south to Mexico, overwinter and then are the first generation of the next year to fly north.

It can take four-six generations of monarch to make their way all the way to the northern most breeding grounds in the Midwest or southern Canada before the final generation migrates back south to Mexico for the winter. So when you see monarchs this spring, they are not the same monarchs that flew south last year. They are that monarch’s great-great-grandchild at least!

How many eggs does a female monarch lay?

Many predators don't like to eat monarchs. Since monarch caterpillars survive off of milkweed, they store toxins from the plants. These toxins make caterpillars and adult monarchs distasteful to most predators, although some have adaptations that allow them to tolerate these toxins.

Viceroys mimic monarch butterflies because monarchs are so distasteful to predators. It allows viceroys to get away when they are mistaken for their look-alike.

Monarch butterflies are diurnal, which means they are active during the day. They need a body temperature of 84 degrees to be able to fly, and the sun also helps them find their way. At night, butterflies find a place to roost in trees or shrubs. They don't technically sleep, at least the way humans do, but they rest in a state called torpor.

Does it hurt a butterfly to pick it up?

We rear and release monarch butterflies in Pollinator Paradise each summer, and we also have a public tagging event during the annual Bee & Butterfly Festival. That means that we do end up handling butterflies quite often.

Butterflies can be injured when touched, because they are covered in feathery scales that can easily fall off. To hold a butterfly, we use the thumb and forefinger to gently grasp all four of its wings and make sure not to rub them against each other so the scales aren't harmed.

Do monarchs return to the same area every year?

Since it takes four-six generations of monarchs to complete migration each year, it is never the same monarch coming back to a spot. However, monarchs often do return to the same area, sometimes roosting in the same tree each year. There doesn't appear to be a specific reason for this. Perhaps it is just great habitat or the perfect stopping point.

Why is a monarch caterpillar eating my dill/parsley?

However, swallowtail caterpillars look similar to monarch caterpillars --- they are both black, white and yellow --- and swallowtails feed on anything in the Apiaceae family, which includes parsley, Queen Anne's lace, carrots, celery, fennel and dill.

(See the differences between monarchs and swallowtails here)

How do you tell the difference between a male/female monarch? 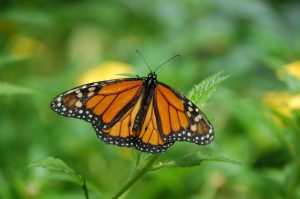 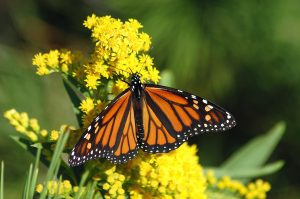 Why are monarch butterfly populations struggling?

Milkweed was misunderstood for many years and was thought of as a weed, so people attempted to eradicate it. Once it was more understood that monarchs must have milkweed to survive, efforts have increased to try to replant milkweed throughout Iowa and the rest of North America.

In addition to their host plant, monarch butterflies and other pollinators also need native food sources for adults. That means nectar sources such as purple coneflowers, goldenrod, Joe pye weed and other prairie flowers.

Pesticide use has also damaged many pollinator populations, and neonictinoids have been proven to stay in soil and plants for years after use. Unnecessary fertilizer and pesticide use has harmed pollinators such as monarchs.

How can I help monarch populations?