Pine siskins, purple finches, dark-eyed juncos, American tree sparrows — these Iowa winter birds are really only just a few of the birds that make winter a bit more fun in this cold state. 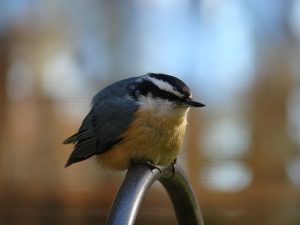 Red-breasted nuthatches live year-round in many parts of the western United States and Canada, but they spent winter, non-breeding season throughout all but the most southern points of the U.S. They can be told apart from similar white-breasted nuthatches by their black eyeline and cinnamon-colored belly. 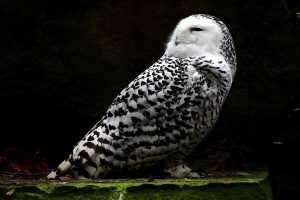 Snowy owls are sometimes spotted in northwest Iowa in the winter, although their typical winter range only goes as far south as the middle of Minnesota and Wisconsin. Snowy owls are only found year-round in the most northern parts of Canada and also breed in Greenland. In the arctic, these birds can hunt at all hours since there is continuous daylight, and they can eat up to 1,600 lemmings each year.

Snowy owls are actually North America’s heaviest owl. Their thick feathers that insulate them from the cold put them at an average of 4 pounds, 1 pound heavier than a great-horned owl and twice as heavy as the continent’s tallest owl, the great gray owl. 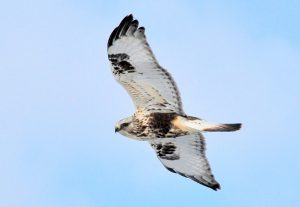 Rough-legged hawks winter throughout most of the United States, except for the southeast, and then migrate through Canada to arctic breeding grounds. This hawk gets its name from its feathered legs, and it is only one of three raptors to have feathers all the way to its toes, along with the ferruginous hawk and golden eagle. 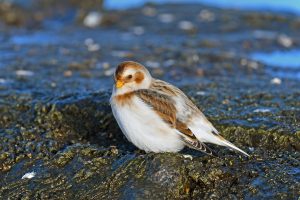 Male snow buntings leave their wintering grounds in the mid- and northern United States and fly to their arctic breeding grounds when temperatures are still as low as -22 degrees Fahrenheit to find a nesting spot in a rocky crevice, and then they await the arrive of females up to a month later.

Snow buntings have a variety of colorings, but they always have white inner wings with black wingtips and a black-and-white tail. 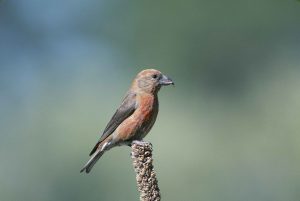 The red crossbill has an interesting range that includes year-round residence in southern and western Canada, throughout the Rocky Mountain range and even into Central America. Its non-breeding area is the northern Midwest and can also be found into Iowa and all but the southern-most United States during winter.

Its name comes from its literally crossed bill which allows it to access conifer seeds into tightly closed cones. The red crossbill can breed any time of the year and anywhere it finds a sufficiently large cone crop. 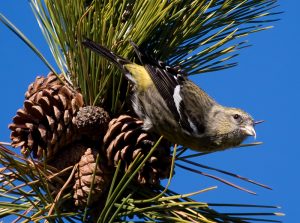 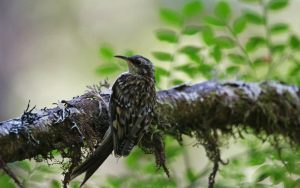 Brown creepers live throughout the U.S. and are a winter, non-breeding resident in Iowa. They typically eat insects, but in the winter will eat suet and peanut butter. Brown creepers don’t need to eat a lot, because they only burn an estimated 4-10 calories per day, and the energy gained from eating only one spider would allow one to climb nearly 200 feet vertically.