The frozen Iowa Great Lakes are dotted with blue and black as ice fishermen set up their shacks, drill holes and search for life below the ice.

And there is still plenty of life to be found, but how exactly do fish survive in those frigid temperatures?

You can learn how ice is created on the lakes and why they don't freeze all the way to the bottom here, and once you have those answers, come back here to see how fish survive under the great sheets of ice.

Some species --- perch, crappies, bluegills and trout --- are able to raise their body temperatures, even in cold water, but they have to eat enough to do so. Other fish, such as catfish, carp and bass, will eat enough in the summer and autumn to put on fat to help them survive the winter, just like bears eating a lot before they hibernate. Crappies, pumpkinseeds, perch and bluegills will look for easy meals such as the immature larvae of aquatic insects in the mud at the bottom of ponds and lakes. 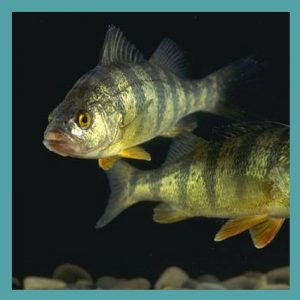 Northern pike and bluegill will often lose weight in winter because they can't find enough food to make up for the calories they are burning just to stay alive.

Body functions slow down in the winter, and although they do eat, fish eat much less. Prey fish will hang out in vegetative cover where they can hide and eat at the same time. Predator fish will then slowly swim by these areas to look for a quick and easy meal. Catfish will sometimes even bury themselves in the mud and just wait for spring (like frogs --- read about that here). 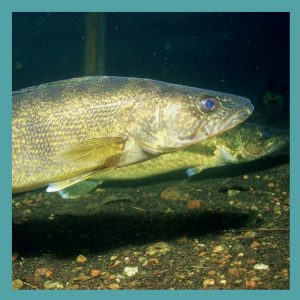 It would seem the easiest way to conserve energy would be to just stay still until it's time to eat, but fish have to keep moving enough for water to pass over their gills to continue to breath.

In shallow lakes that freeze almost to the bottom, fish kills can happen when there is not enough oxygen left in the water.

When ice forms, it seals the water off from exchanging oxygen with the air and also blocks out light that helps plants and phytoplankton grow to produce oxygen in the water. Throughout the winter then, oxygen levels slowly decline.

However, colder water can hold more dissolved gas than warmer  water can, so water below freezing holds the most oxygen. Then, because fish metabolism has slowed down, they are using less oxygen. Some fish even go into a state called torpor that decreases their need for oxygen even more.

In short, life in the icy lakes in winter is pretty close to what it is in summer, except that it is much slower and there is less vegetation.

There’s something about making a craft three-dimensional. It just makes things more fun. Try out this three-dimensional fish craft — it really pops! You’ll need: Colored paper Scissors Glue stick Marker Cut your 8.5×11-inch sheet of paper in half the short way. Fold in half the long way and cut three-quarters of an oval, making END_OF_DOCUMENT_TOKEN_TO_BE_REPLACED

Shake, wiggle and flop. These floppy fish are simple and a lot of fun for kids to make! You’ll just need a few supplies: Two pieces of colored paper Scissors Gluestick Markers Begin with the sheet of paper that you want to be the main color of your fish. Fold one corner in to the END_OF_DOCUMENT_TOKEN_TO_BE_REPLACED

Origami is one of those crafts that you just feel accomplished when it’s completed. It’s a skill that you can share and show off, and this origami fish is a simple design that even children can do. (Fold a leaping origami frog.) First, take a square sheet of paper — whether it’s origami paper or END_OF_DOCUMENT_TOKEN_TO_BE_REPLACED