We have many wonderful volunteers at the Dickinson County Nature Center, and one of regular front desk helpers loves to bring in articles with interesting animal facts.

The last article she brought in from "Smithsonian" magazine told that the highest bird flight ever recorded was by the Ruppell's griffon, a vulture native to Africa. It's flight was documented at 37,000 feet when it was sucked into a commercial aircraft engine in November 1973 over Ivory Coast. 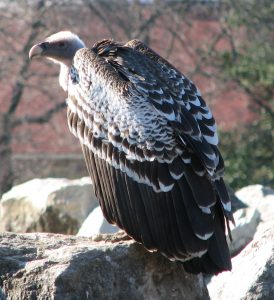 First, I can't imagine what that felt like on a plane. Second, that inspired me to start looking up how high other birds fly.

The second-highest flight documented is the common crane, which is known to fly across the Himalayan Mountains at about 33,000 feet. Flying this high helps them to avoid predators such as eagles. 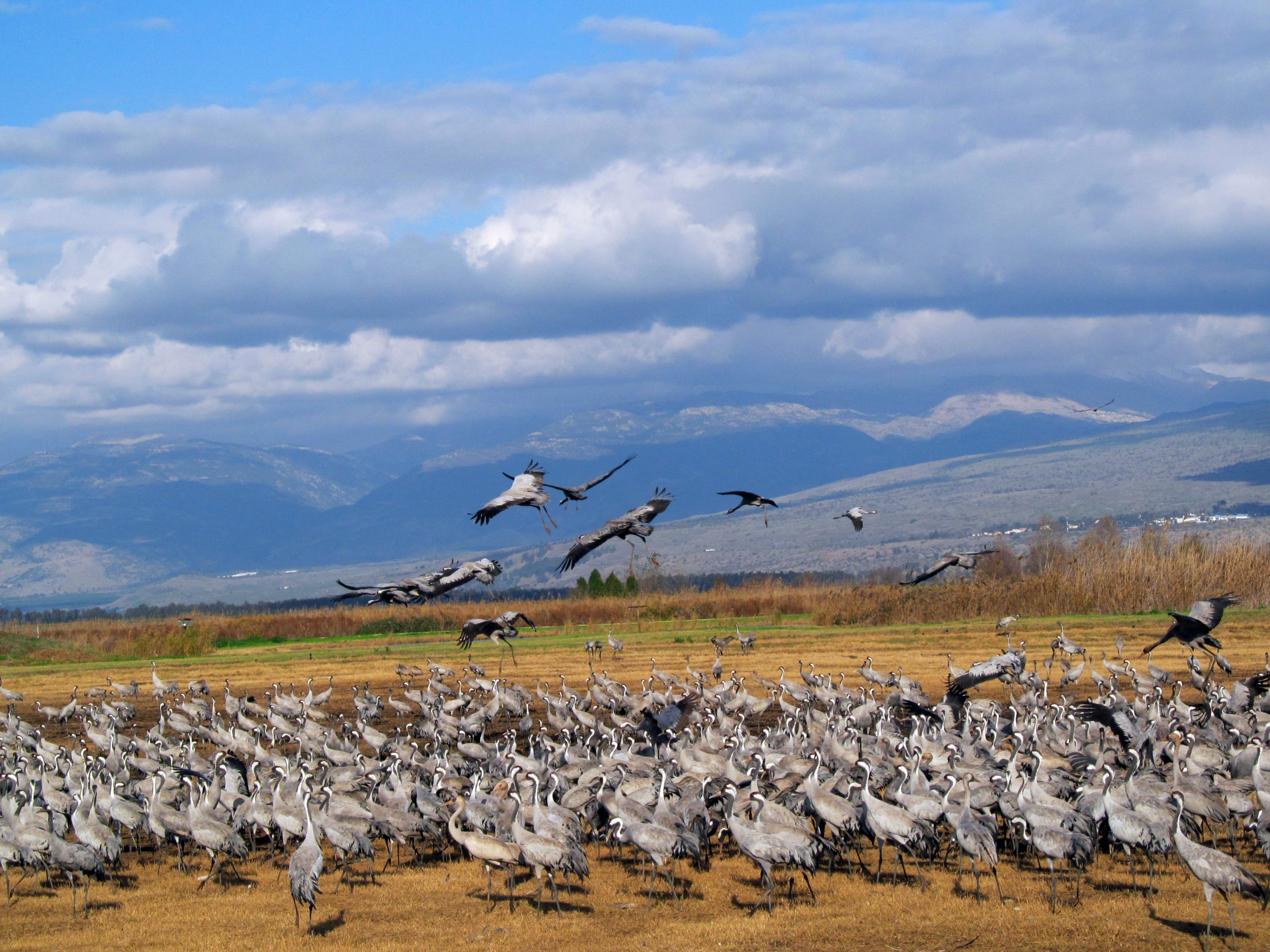 Bar-headed geese have been seen at 29,500 feet over the Himalayas, and whooper swans have flown at heights of 27,000 feet over Northern Ireland.

Mallard ducks are also among the highest flying creatures, because although they generally migrate at about 200-4,000 feet, a jet once struck one above Nevada at 21,000 feet in altitude. This was the highest documented flight ever by North American waterfowl. 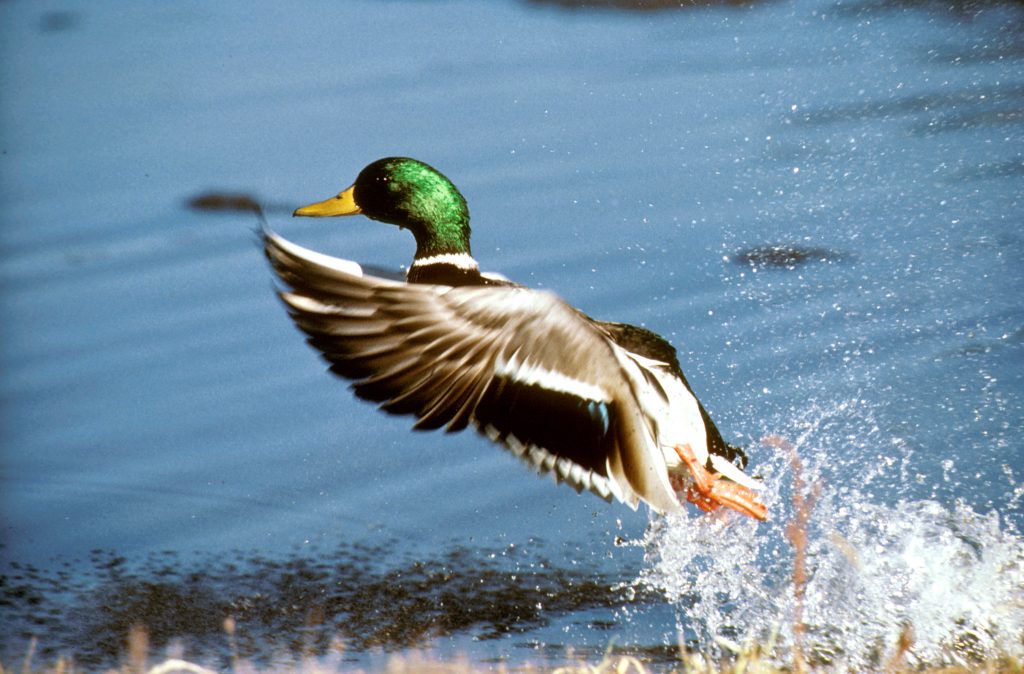 Most birds fly below 500 feet, mainly because it saves energy and lessens the risk of danger. At higher heights birds are also at the mercy of winds and keen-eyed predators like hawks.

However, during migration, birds will fly higher. Higher up, birds avoid dehydration and overheating during the long trip due to the cooler air.

Birds are specially adept at high flights because of the way they process oxygen. Humans reach their maximum altitude at about 26,246 feet, which is called the Death Zone. At this elevation, humans need assistance to breath or severe altitude sickness can set in. All birds have efficient gas-exchange in their lungs, increased oxygen diffusion in tissue and the ability for high aerobic activity, among other traits.

(Tell apart finches at your feeder)

Naturalist Ashley Hansen talks about how amazing bird eggs are — from the myriad of colors to the variety of sizes. You can learn even more about bird eggs by downloading our bird egg memory match game! Simply print off the pieces on cardstock, cut them out and match eggs with the adult bird. When END_OF_DOCUMENT_TOKEN_TO_BE_REPLACED

Who doesn’t have empty toilet paper tubes? We all do. And if you don’t right now, you definitely will have some soon. Let’s use them for a fun purpose and turn them into adorable birds, and you can make whatever kind of bird you want. I chose a robin — my mom’s favorite — and END_OF_DOCUMENT_TOKEN_TO_BE_REPLACED

Bright birds with forked tails that swoop and dive around you — we see a lot of these in Kenue Park. They’re definitely swallows, but can you tell which kind? In Iowa, you’re likely to see four different kinds of swallows: Barn swallows, tree swallows, cliff swallows and purple martins. They’re quite similar, but relatively END_OF_DOCUMENT_TOKEN_TO_BE_REPLACED

A colony of white, gourd-like houses hang on a large pole outside of the Dickinson County Nature Center. Around them flies dozens of gliding, floating, flitting dark birds — purple martins. Local birder and owner of Bird Haven in Spirit Lake Wendell Hansen has cared for the purple martins for many years, and last June END_OF_DOCUMENT_TOKEN_TO_BE_REPLACED

Two big white birds — rehabilitated trumpeter swans — live on the Kenue Park wetland, but last week we also spotted three more white birds. Egrets? Cranes? Herons? We were trying to figure out what they were but we couldn’t see their necks, because it was breezy and they had their heads hunkered down. However, END_OF_DOCUMENT_TOKEN_TO_BE_REPLACED

It’s a big, white bird paddling on that body of water. But what exactly is it? Most likely, it’s a trumpeter swan if you’re in Iowa. The trumpeter swans is native to the state and is the biggest waterfowl native to the U.S., its wingspan reaching up to 8 feet — that’s taller than Yao END_OF_DOCUMENT_TOKEN_TO_BE_REPLACED

The Iowa Great Lakes and the smaller lakes and wetlands in the area are starting to melt. That means that birds that flew south to warmer areas for the winter are now flying back north to their summer breeding grounds. Waterfowl are definitely on the move this month, and it’s fun to see the birds END_OF_DOCUMENT_TOKEN_TO_BE_REPLACED

Birding is such a popular hobby because everyone can do it. Whether you are backyard birding, taking a hike or even boating, you can always catalogue the birds that you see. The he Dickinson County Nature Center features nests of some of the most common birds you might see right outside your window. (Grackles, blackbirds END_OF_DOCUMENT_TOKEN_TO_BE_REPLACED