Before the Spirit Lake Massacre

A man named Henry Lott, cited as an “unscrupulous character” by an article in 1886 in the Sibley Gazette, had an encounter with Sintominaduta, Inkpaduta’s brother, and blamed the Wahpekuti tribe for burning his cabin and killing his family, although that didn’t actually occur. Settlers went to the ransacked cabin to find Lott’s family safe, except for his 12-year-old son, who had run from the Native Americans and died in the elements. Lott blamed the American Indians for his son’s death and eventually held them responsible for his wife’s death two years later, claimed she hadn’t recovered from the earlier incident.

Two years later, Inkpaduta’s band was struggling through a harsh winter, and one of his grandchildren died of starvation. Looking for food, the band followed a herd of elk to Smithland, IA, to hunt. 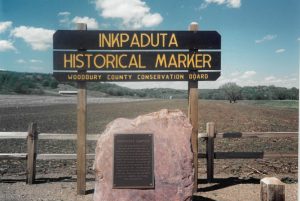 Photo of the Smithland historical marker

There, they found corn under the snow but were accused of stealing it from cribs. The Native Americans also claimed that settlers intercepted the elk they were chasing. To add to the tensions, during the chase, a settler’s dog attacked one of the braves. The dog was killed, and the owner beat the man who killed it. The Native Americans demanded provisions in return for the problems. Scared, the settlers went into the American Indian camp and took their guns and tore down their teepees.

Moving north, an angry Inkpaduta and his small, starving band reached Peterson and killed all the cattle they could in revenge and also injured some settlers. From there, Inkpaduta’s disgruntled band headed north to the Okoboji lakes.

On March 6, 1857, Harvey Luce returned from a provisions trip to Waterloo, but more items were needed, so his father-in-law, Rowland Gardner Sr., prepared to leave two days hence for Fort Dodge from Dickinson County. 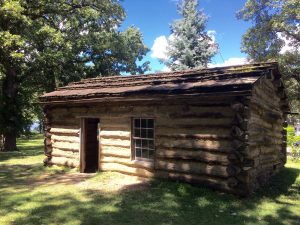 On March 8, the family rose early to give Rowland an early start, and a group of Native Americans from Inkpaduta’s Wahpekuti band came in to share breakfast — 14 in all, Abbie Gardner recalled. They requested food, ammunition and other provisions from the Gardners.

About 3 p.m., Abbie remembered hearing gunshots from what sounded like the neighboring cabin of James Mattock and his family. Soon after, the band of Native Americans returned to the Gardner cabin and asked for flour, shooting Rowland Sr. as he went to get it.

Mrs. Luce and Mrs. Gardner tried to get the gun but were killed in the process. Abbie was sitting with the three other children — her younger brother, niece and nephew — who were taken from her and killed outside.

In the next five days, Abbie traveled with the Native Americans who moved north and continued killing the other settlers in the area. Three other women were taken captive as well: Mrs. Lydia Noble, Mrs. Elizabeth Thatcher and Mrs. Margaret Marble.

On March 26, the group of Native Americans and captives reached Springfield, MN — now Jackson. A Mr. Markham had found the Spirit Lake dead on March 9 and had traveled to Springfield, the next closest settlement, to warn the settlers of the possible impending danger. Twenty-one Springfield residents, including Eliza Gardner, Abbie’s sister, gathered in one large cabin and prepared to fight.

The settlers and Inkpaduta’s band skirmished, and one child was killed.

The Stewart family had tired of the cramped space and the constant fear at the Thomas cabin, where the Springfield residents had gathered to protect themselves, and had returned to their separate homestead. The Native Americans found the isolated Stewart family and killed the father, mother and two little girls. The son, about 8 or 9 years old, hid behind a log during the attack and fled to the Thomas cabin.

Abbie and the captives continued on with Inkpaduta’s band. 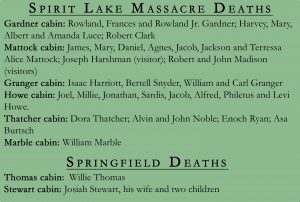 Read other installments in the series:
“Traveling to Spirit Lake”
“Who was Inkpaduta?”
“Taken captive”
“Abbie’s rescuers”
“Life continues on”