The Iowa Great Lakes were formed as a result of glacial activity in the area.

West Lake Okoboji is thought to have been created by the Wisconsin Glacier about 14,000 years ago as it retreated to the north. The Des Moines Lobe of the glacier is what covered Iowa and is what outlines Clear Lake, Eldora, Carroll, Storm Lake and West Lake Okoboji.

Glacial activity is evident around the lakes as well. Large boulders on the shores of Big Spirit Lake and other Iowa Great Lakes were left there by the glacier as it retreated.

The glacial period also had different wildlife than what we see today, including two creatures that are no longer alive.

Iowa was once home to the Harlan's ground sloth (Paramylodon harlani), a nearly elephant-sized sloth that went extinct about 12,000 years ago. 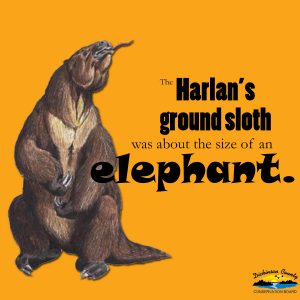 Bones from the sloth were found in the state in the early 2000s. Because of the locations that the remains are found, this sloth is thought to have lived in open grasslands and probably was an herbivore that grazed on grasses and sedges.

It was most likely a solitary animal with limited social interaction and is thought to have been slow-moving and clumsy.

Mammoth (Mammuthus) fossils have been found throughout Iowa and northwest Iowa, proving that the species once walked on the glaciers that covered the Iowa Great Lakes area. The Dickinson County Nature Center has its own mammoth tusk fragment on display in the glacial trail tour on display beginning in 2018. (Click here to learn about nature center exhibits.)

Mammoths were about the size of African elephants, weighing 12,000-18,000 pounds. Their tusks were about 15 feet long and were used for fighting and digging in the snow.

Mammoths were herbivores and ate mostly grass and probably other plants and flowers. 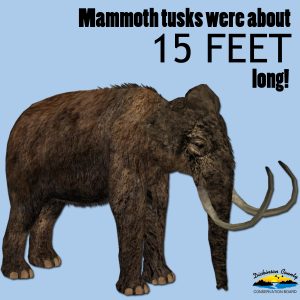 It would take 25 Statues of Liberty…

The glacier that sat on what is now the Iowa Great Lakes area was called the Des Moines Lobe of the Wisconsin Glacier, and it was huge! (Read about the landform regions in Iowa) It carved out the lakes, left behind kames and eskers and created fens and kettleholes. It’s hard to imagine just how END_OF_DOCUMENT_TOKEN_TO_BE_REPLACED

After European settlement, osprey were extirpated in Iowa. Many of the wetlands were drained and water quality lowered as the landscape changed, and these fishing birds of prey sought homes in other areas. However, in the early 2000s, after years of concentrated efforts to improve water quality in the Iowa Great Lakes area, osprey returned END_OF_DOCUMENT_TOKEN_TO_BE_REPLACED

Mammals are usually the creatures that garner oohs and aahs when people see them on hikes, in their yards or even in zoos and conservation centers. They’re usually furry and cuddly with adorable eyes. (Some are ugly though — read about them here) Iowa has 57 different common mammal species, and some are charismatic while END_OF_DOCUMENT_TOKEN_TO_BE_REPLACED

Walking along the glacial landmark tour inside the entrance of the Dickinson County Nature Center, visitors can to experience replicas of many of the places created by the Des Moines Lobe of the Wisconsin Glacier when it was in the county about 12,000 years ago. From bouncing on a fen to climbing a miniature kame END_OF_DOCUMENT_TOKEN_TO_BE_REPLACED

My husband and I took a trip to Utah this summer. We were enamored by the beautiful landscape, with red rocks rising out of sandy floors, hoodoos sprouting out of canyon lands, short scrub trees dotting desert landscapes. During a drive through Zion National Park, we overheard a student on the bus say “I haven’t END_OF_DOCUMENT_TOKEN_TO_BE_REPLACED