With their bumpy red heads, hanging flaps of skin around their faces and large tails, wild turkeys are quite a sight.

The odd parts of their bodies also have interesting names and purposes. Let's look at some of the body parts that make a turkey unique. 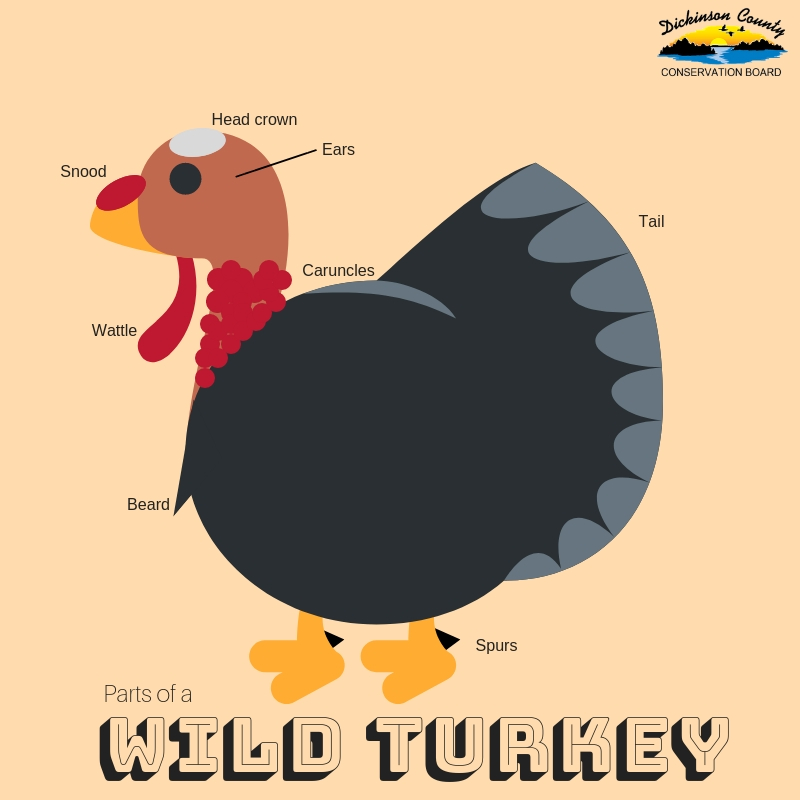 The snood is the fleshy flap of skin that hangs off a turkey's beak. 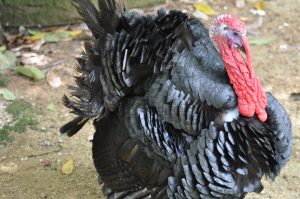 Wild turkey with a long snood. Photo by Shankar S. via Wikimedia Commons

Scientists haven't found any specific function for the snood, but it does fill up with blood and hangs over the beak when male turkeys are strutting and showing off looking for mate. According to the National Wild Turkey Federation, females prefer to mate with long-snooded males. Also, males with shorter snoods will give in to males with longer snoods.

A wattle is a fleshy flap of skin under the turkey's chin that some people may call a dewlap. The dewlap is more prominent in males than females.

A male turkey has a beard that hangs off of its chest. It is made of coarse, rough feathers. 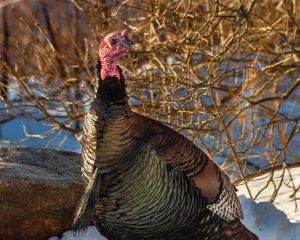 The beard comes out of the turkey's chest. Photo by Paul VanDerWerf, via Wikimedia Commons

A beard is about 3-4 inches on a young male and can grow 10 inches or longer on a turkey that is at least 3 years old. Some tom turkeys have multiple beards. A small percentage of female turkeys (10-20 percent) grow beards, but it may be a genetic mutation.

Caught with his spurs on

Male turkeys have spurs on the back of their legs that are sharp and allow them to fight with other birds. Older, dominate turkeys fight off other males when trying to breed.

Turkeys typically have 18 tail feathers. Males have feathers with black tips, make them look shiny from a distance, and females have lighter feathers that allow them to stay hidden while incubating their nests.

Caruncles are bumpy patches on a turkey's neck. The carunclesmay play a role in attracting a mate.  The male wild turkey's caruncles can turn blue, white or red when they fill with blood.

Turkeys do not have external ear flaps like humans do, but they still can hear about 10 times better than people. They also have great eyesight, but they can only see in black and white.

Male turkeys have a bare head crown that is mainly white during the spring, sometimes with a red tint. Females have a feathered head. 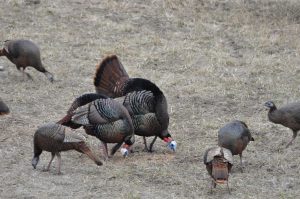 Read more about turkeys with "10 Turkey Facts We Bet You Didn't Know."

Every Thanksgiving, our naturalists speak at Harris-Lake Park Elementary for a grandparent program, and this year, our environmental education coordinator Bryanna Kuhlman discussed what animals are thankful for. I thought her topic was so creative that I decided to share her ideas with you. Many of the things animals are thankful for are what humans END_OF_DOCUMENT_TOKEN_TO_BE_REPLACED

To go along with our blog about turkeys this week (read it here), we thought we might as well make a turkey-themed nature craft too. You will just need a few supplies: Turkey template printed on white paper (Find the template here) Leaves White computer paper Crayons Scissors Glue Begin with a trek outside. Pick END_OF_DOCUMENT_TOKEN_TO_BE_REPLACED

Crafts don’t always come together the way you think they will. I had a brilliant idea this morning to make place cards with leaf etchings on them, and I tried it out. Yikes. Ugly. If you come up with something pretty with that idea, let me know. So instead, I decided to post how to END_OF_DOCUMENT_TOKEN_TO_BE_REPLACED

If you want to be the stand-out at Thanksgiving, bring these 10 turkey facts with you. Soy de Mexico. All turkeys originated in Mexico. Now it imports about 400 million pounds of turkey from the U.S. for consumption. They were wanted for their feathers. Wild turkeys can have a wing span — their wings stretch out to END_OF_DOCUMENT_TOKEN_TO_BE_REPLACED

Birding is such a popular hobby because everyone can do it. Whether you are backyard birding, taking a hike or even boating, you can always catalogue the birds that you see. The he Dickinson County Nature Center features nests of some of the most common birds you might see right outside your window. (Grackles, blackbirds END_OF_DOCUMENT_TOKEN_TO_BE_REPLACED