The grizzly bear in the lower level of the Dickinson County Nature Center has huge paws. 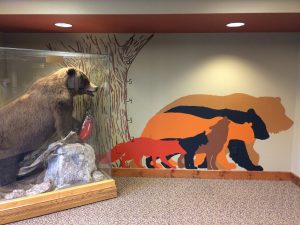 At least, it seems like it. However, grizzly bears actually have an average of 15-inch paws, not even including the claws. But here in Iowa, we don't realize how big grizzlies and other bears are. We just don't get to see them unless we're out a zoo or traveling.

Iowa did used to have bears though.

Black bears are native to the state of Iowa. Before European settlement, these bears were widespread in the Midwest, and they were documented in 48 counties --- mostly in eastern Iowa --- before 1900. The last historical documentation of a pre-1900 black bear being shot was actually near Spirit Lake, in the year 1876.

During colonization, bears were killed because they damaged crops and harassed and killed livestock, and they were also valuable as food and for fur. Because of overhunting during settlement, the black bear was extirpated in Iowa. Extirpated means a species no longer survives in an area, usually due to human persecution or habitat destruction, but it is not completely extinct in the world.

Regulation of the killing of bears in the 20th century helped create viable --- or healthy --- populations in states around Iowa, such as Minnesota, Wisconsin and Missouri. Iowa does not have a current breeding population of black bears, and those appearing in eastern counties are usually coming from surrounding states.

Lewis and Clark encountered grizzly bears on their expedition in 1805, but it was after they had passed through Iowa. They saw tracks of a large bear in what is now North and South Dakota, and they first came into contact with two brown bears in what is now Antelope, Montana.

Grizzly bears once ranged across most of western North America, and it is unlikely that Iowa ever had a resident population. However, grizzly bears may have stumbled into the state like animals such as moose, elk and black bears do today. 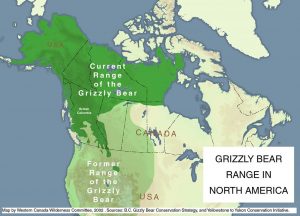 Bears are still hunted where populations are sounds, such as grizzly bear hunting in Alaska. The state houses 98 percent of the U.S. brown bear population, and hunting is welcome and well-regulated. Grizzly bears have been taken off of the Federal Endangered Species list in the continental United States as well.

As Iowa was settled, its landscape and demographics changed, and that meant that its wildlife changed as well. Many species, such as deer, turkeys, trumpeter swans and bobcats were extirpated or close to extirpation. However, increasingly positive conservation attitudes has helped to bring back many species. Here are some of the predators that reign in END_OF_DOCUMENT_TOKEN_TO_BE_REPLACED

Whose scat is that?

Trumpeter swans are a majestic sight. Their graceful long necks. Their brilliant white feathers. Their long, slender wings that help them hover above the earth. As strong as they may look, being the largest waterfowl native to North America, they are not invincible. In fact, they were once extirpated — extinct in a local region END_OF_DOCUMENT_TOKEN_TO_BE_REPLACED

After European settlement, osprey were extirpated in Iowa. Many of the wetlands were drained and water quality lowered as the landscape changed, and these fishing birds of prey sought homes in other areas. However, in the early 2000s, after years of concentrated efforts to improve water quality in the Iowa Great Lakes area, osprey returned END_OF_DOCUMENT_TOKEN_TO_BE_REPLACED

Mammals are usually the creatures that garner oohs and aahs when people see them on hikes, in their yards or even in zoos and conservation centers. They’re usually furry and cuddly with adorable eyes. (Some are ugly though — read about them here) Iowa has 57 different common mammal species, and some are charismatic while END_OF_DOCUMENT_TOKEN_TO_BE_REPLACED