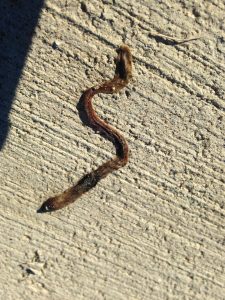 After it rains, people often step outside and think, "It smells like worms."

Environmentalists have been watching and waiting as new invasive species begin to take hold and move across the country and across Iowa. Jumping worms, the brown marmorated stink bug, the gypsy moth and the spotted lanternfly. Let’s take a look at a few of these up-and-coming invasives. Jumping worms Most earthworms are not actually native END_OF_DOCUMENT_TOKEN_TO_BE_REPLACED

Insects are beneficial. For some reason, most people grow up thinking “Ew” whenever they think “Insect.” However, the vast majority of insects are actually beneficial to humans and the environment. Even those that we think of as annoying, such as mosquitoes, can actually be beneficial in some way. Mosquitoes are actually pollinators. A type of END_OF_DOCUMENT_TOKEN_TO_BE_REPLACED

Bog, marsh, swamp, fen. Often these words are used interchangeably, but in reality, each is its own type of wetland, which is a word used to refer to water-saturated landscapes. (Watch: What is a wetland?) A marsh is a wetland that is continually full of water. If you have been to the Florida Everglades, then END_OF_DOCUMENT_TOKEN_TO_BE_REPLACED

Iowa is full of adorable mammals, so many that’s its hard to choose which are the cutest, but the state also has so uggos. Our environmental education coordinator likes to call these mammals non-charismatic, because ugly tends to turn people off. Although perhaps not the most attractive, the following mammals do still have a important END_OF_DOCUMENT_TOKEN_TO_BE_REPLACED

I (Kiley) know I made this exhibit at the Dickinson County Nature Center, but this might be the most boring thing I’ve ever written. Thirty-six inches down in our soil, you will find loam which is characterized by common, fine, distinct brownish yellow mottles, a weak fine prismatic structure…yikes. It continues but I won’t bore END_OF_DOCUMENT_TOKEN_TO_BE_REPLACED