The Dickinson County Nature Center frog ambassadors are always a hit with kids when they come out during programs.

That is often because they make the programs more exciting when they escape from the grasp of the naturalist with their squirmy, slippery bodies. 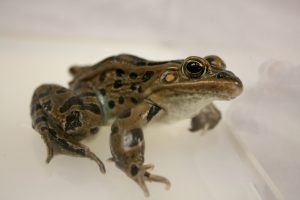 Frogs march along.
A group of frogs is called an army.

Females are prolific egg layers.
Northern leopard frogs breed between late April and early June, with each female mating only once. She will then lay a single egg mass including thousands of eggs --- which a male fertilizes as the eggs leave her body --- and then leaves the pond where the eggs are. 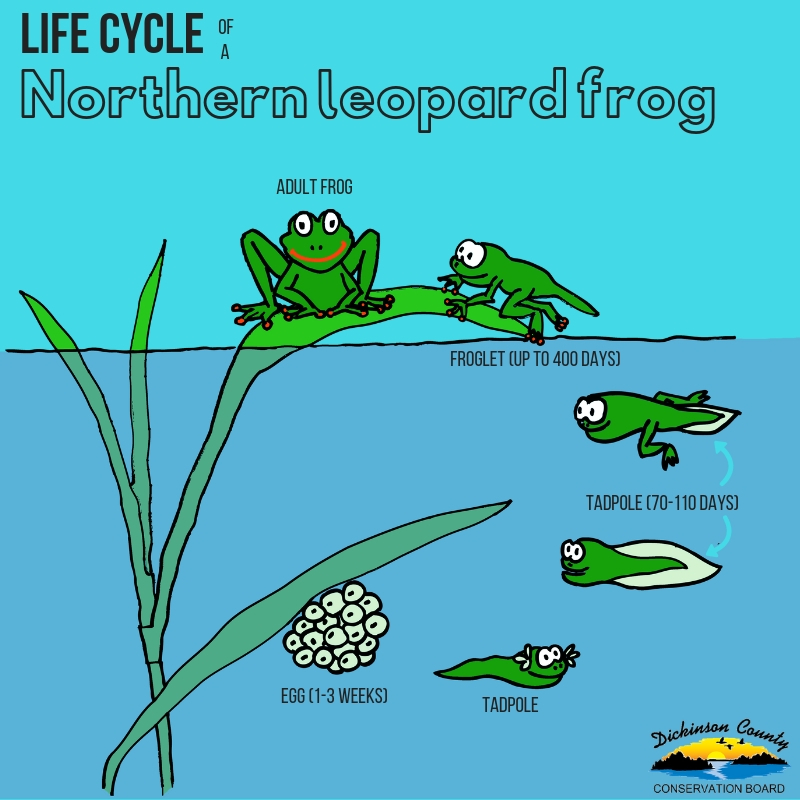 Adults don't always live near water.
After breeding season, some northern leopard frogs will move away from ponds and wetlands to live in meadows or grasslands. They absorb water from dewy plants during this time. In the winter, they travel back to their "home" pond.

Some frogs don't have spots.
The Burnsi color morph of a leopard frog is a genetic variation that is brownish-green but lacks spots.

They taste good.
American toads are covered in red and yellow wart-looking spots that actually contain glands that secrete poison. Don’t worry, it won’t hurt you if you touch them. The poisonous milky fluid makes them taste bad to predators, and it is harmful to predators when swallowed or if it gets in their eyes.

Leopard frogs do not have the same secretions as toads, or as pickerel frogs. Instead, northern leopard frogs leap into the water or erratically hop to escape predators. And they have a lot of predators --- fish, herons, snakes, hawks, raccoons, foxes, otters, turtles and more.

They will lie on top of the mud at the bottom of a body of water or partially bury themselves. They will then freeze and thaw right along with their hibernacula — the place where they hibernate.

As the winter comes on and the area around the frog’s hibernacula freezes, ice crystals will also form in the frog’s body cavity, bladder and under its skin. The high amount of glucose — a type of sugar — in the frog’s vital organs, such as its heart, will prevent it from freezing completely.

(Read more about how this works here.)

Toads are such overlooked creatures. They’re a little lumpier and a little drabber than frogs, so they tend to be viewed as not as cute. However, we love toads! So we wanted to make a fun toad craft that you can do at home. You’ll need: A paper plate Crayons or markers Scissors Brown construction END_OF_DOCUMENT_TOKEN_TO_BE_REPLACED

Did you know tree frogs’ last bone in their toes is shaped like a claw? Have you read about how about frogs’ bodies freeze during the winter and thaw in the spring? Do you know what a group of frogs is called? Click here to find out. Frogs are really interesting creatures, and many people END_OF_DOCUMENT_TOKEN_TO_BE_REPLACED

A gentleman called last week because he had heard a sound like someone running a finger along the teeth of a comb in his basement. He had found and captured a small frog and wanted to bring it to us for the winter. Frogs usually hibernate for the winter (read about that here), but this END_OF_DOCUMENT_TOKEN_TO_BE_REPLACED

Sy the tiger salamander is huge. The Dickinson County Nature Center has two tiger salamander animal ambassadors, named Manny and Sy, and they are members of the largest land salamander species in North America. Tiger salamanders usually grow 7-13 inches long, but Sy is around 14 inches in length from head to tail. That’s one END_OF_DOCUMENT_TOKEN_TO_BE_REPLACED

Since we talked today about five facts that will make you love toads (read the blog post here), we decided to make a toad-themed craft. If you look up toad crafts, there are not a lot out there! Like we mentioned in the blog post, toads tend to get overlooked in favor of their more END_OF_DOCUMENT_TOKEN_TO_BE_REPLACED

Because frogs are brightly colored, they tend to be looked on with more awe than toads. However, American toads have some pretty neat attributes when you get to know them. They taste bad. American toads are covered in red and yellow wart-looking spots that actually contain glands that secrete poison. Don’t worry, it won’t hurt END_OF_DOCUMENT_TOKEN_TO_BE_REPLACED

I am by no means an origami expert, but I always feel accomplished when I complete a new project. We’ve tried butterfly origami (you can find that blog entry here) and today decided to attempt making interactive origami — a leaping frog! Steps 1-4: Fold your paper hot dog, then crease the right and left END_OF_DOCUMENT_TOKEN_TO_BE_REPLACED