Take a walk through a garden center, and it's easy to get swept away by all of the exotic flowers that you can plant in your yard.

However, we always encourage people to think native when planting a garden, and fall is a great time to plant native prairie seedlings in your yard as they will overwinter and be ready to sprout up next spring and summer.

If you like tiger lilies, which are native to Asia, instead try wood lilies (Lilium philadephicum). 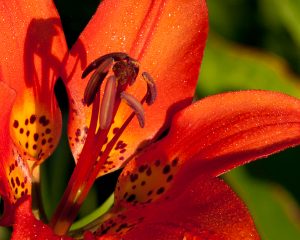 Wood lilies are a perennial that thrives in sun, part shade and full shade. They bloom mid-June to mid-August and grow 1-3 feet tall. Each plant has one-three reddish-orange flowers that grow 1 1/4- to 2-inch flowers. They grow well in acidic and sandy soils from woodlands to tallgrass prairie areas, and wildlife feed on the bulbs.

If you like Russian sage, which is native to Europe and Asia, instead try lead plant (Amorpha canescens). 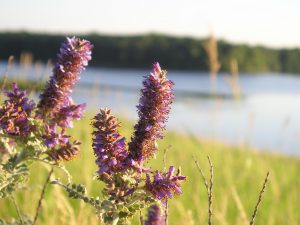 Lead plant is a perennial that grows well in sun and part shade and blooms May to August. It grows up to 3 feet tall and has tiny purple flowers in 2- to 7-inch spikes. The leaves of the plant are hairy and appear white.

Lead plant grows well in dry, sandy soil throughout the prairie and is a popular food source for herbivores.

If you like orchids, many of white are native to Asia and Australia, instead try Ohio spiderwort (Tradescantia ohiensis). 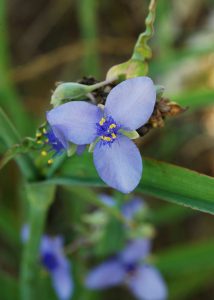 Spiderwort is a part-shade perennial that blooms June-August with blue and purple flowers. It grows 30 inches tall in almost any amount of light but must be moist in full sun. Bees, beetles and herbivores use this native plant as a food source.

If you like Queen Anne's lace, native to England, instead try boneset (Eupatorium perfoliatum). 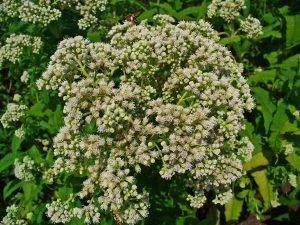 This perennial grows in a variety of light conditions and blooms June-October. It grows 3-6 feet tall and has tiny, white flowers that are arranged in fuzzy clusters at the top of each stem. Its nectar and pollen attracts a variety of pollinating insects and moth caterpillars.

If you like shasta daisies, which are native to Europe, instead try black-eyed susans (Rudbeckia serotina). 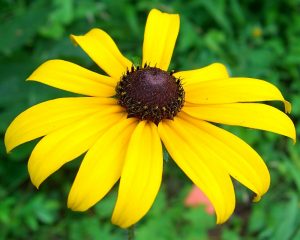 Black-eyed susans are a popular native flowers because of their gorgeous yellow blooms that grow up to 3 inches in diameter June-September. They are a short-lived perennial but grow well in dry areas and in sun, part shade and shade. Black-eyed susans attract bees and butterflies as well as birds for its seed.

If you like dame's rocket, which spreads rapidly and is native to Europe and Asia, instead try prairie phlox (Phlox pilosa). 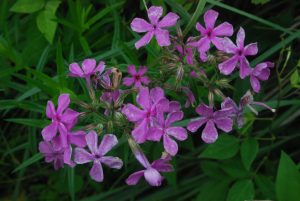 If you like lilies of the valley, which are native to Europe and Asia, instead try smooth Solomon's seal (Polygonatum biflorum). 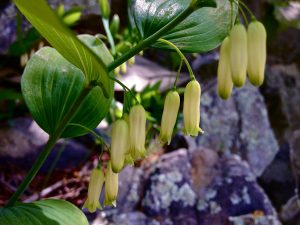 This perennial blooms May-June in part shade or shade with white, bell-shaped flowers that grow in groups of two-10. It flourishes in partly-shaded woodlands and draws in bees, flies and beetles.

If you like calla lilies, which are native to Africa, instead try Jack in the pulpit (Arisaema triphyllum). 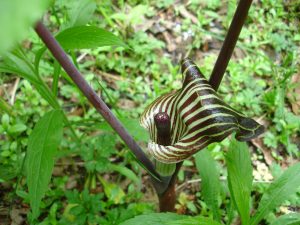 Jack in the pulpit has a similar shape to calla lilies but is a different color. It is a perennial that is found in low, moist woods and blooms April-June. Its spadix, otherwise known as the Jack, is usually 2-3 inches long and is covered in minute yellow flowers. The leaf-like spathe covers the lower part of the spadix and curves over to form the pulpit.

There are so many options of natives to plant. You can also learn about five decorative milkweeds to add to your landscaping and some other great options to start your pollinator garden.

If you love pollinators as much as we do, you’re always looking for plants to add to your landscaping that can help provide habitat and food sources. Our pollinator populations are dwindling, and it’s up to us to bring them back. You can truly make a difference even with small pollinator plots at your own END_OF_DOCUMENT_TOKEN_TO_BE_REPLACED

As a kid, we all picked a puffy dandelion and blew the wisps into the air. Little did we think that we were actually helping dandelions disperse their seeds. Dandelions and other plants only survive when their seeds are dispersed so that new plants grow the next season. They spread through a variety of ways END_OF_DOCUMENT_TOKEN_TO_BE_REPLACED

Native prairie plants make wonderful habitat for wildlife like voles, turkeys, rabbits, ground squirrels, hawks and foxes. They provide both habitat and food sources for tiny creatures such as monarch butterflies, bumblebees and milkweed beetles. They are beautiful to look at. However, they are also important in a way that we can’t see. Deep down END_OF_DOCUMENT_TOKEN_TO_BE_REPLACED

Kids like to draw on themselves — or on their siblings. Faces covered in permanent marker. Arms decorated with stripes and dots. Bellies covered in color. This craft lets kids actually paint themselves for a purpose as you create a fun handprint/footprint flower! You’ll need: Fingerpaint 11×17 paper Squirt green paint onto the feet of END_OF_DOCUMENT_TOKEN_TO_BE_REPLACED

Summer is about sun, green grasses and leaves, brightly-colored flower blooms. This sun catcher craft takes all of summer and puts it in one simple piece. To make your own sun catcher, you’ll need: Two self-adhesive laminating sheets Flowers and leaves Scissors Twine First, make sure to use self-adhesive laminating sheets, even if you have END_OF_DOCUMENT_TOKEN_TO_BE_REPLACED

You’ve learned that pollinator populations are dwindling and that you can help by planting native species in your garden to provide habitat and food sources. But what do you plant? It can be overwhelming to look at all the options of native flowers that you can put in your garden. It’s even a lot for END_OF_DOCUMENT_TOKEN_TO_BE_REPLACED