After European settlement, osprey were extirpated in Iowa.

Many of the wetlands were drained and water quality lowered as the landscape changed, and these fishing birds of prey sought homes in other areas. However, in the early 2000s, after years of concentrated efforts to improve water quality in the Iowa Great Lakes area, osprey returned and nested on a light tower at Spirit Lake Middle School.

The Department of Natural Resources and Dickinson County Conservation Board worked for years to bring in osprey chicks from Minnesota and have them fledge --- learn to fly --- in the Okoboji area, because osprey tend to return to nest within 50 miles of where they fledged. The program was a success, with a nest in Kenue Park being occupied the last eight years and osprey nesting throughout the Iowa Great Lakes region.

Many other creatures went through population issues as Iowa was developed, and efforts helped to bring back species such as trumpeter swans, whitetail deer and turkeys. However, some species are still extirpated --- extinct in a certain place --- in Iowa. Six mammals in particular are still extirpated in the state.

As its scientific name suggests, the technical term is a bison, not a buffalo. American bison used to roam the prairies of Iowa and other Midwestern states, but development and tillage pushed the species out. The only place bison have continuously lived in the wild is Yellowstone National Park.

(The National Park Service has a fun blog about bison here.) 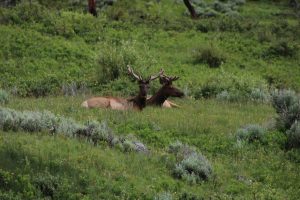 Elk also used to roam the prairies, and prior to European settlement, researchers estimate populations sat at about 10 million in the United States and Canada. Today, about 1 million elk like in states such as Wisconsin, Michigan, Minnesota, Missouri, Pennsylvania, Arkansas, Kentucky, Tennessee, Virginia and North Carolina. They reside in alpine meadows, desert valleys and hardwood forests. 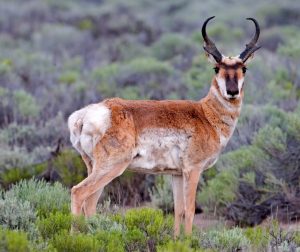 Pronghorns are herd animals that live in grasslands in western and central North America. They are known for their distinctive horns and for also being the fastest land mammal in North America, able to travel miles at more than 50 miles per hour. They are the second fastest land mammal in the world after the cheetah. However, they are not known for their jumping ability. Instead of jumping fences they often slide underneath. 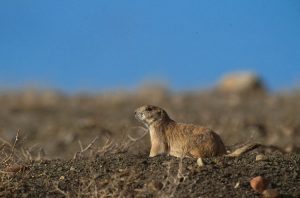 Black-tailed prairie dogs live in the Great Plains region east of the Rocky Mountains, from Mexico north to Canada. They build burrows in fine soils in dry, flat grasslands and live together in colonies. Colonies have an average of 12 dogs per hectare, and the largest colony ever recorded spanned more than 25,000 square miles with more than 400 million prairie dogs residing in it.

Prairie dogs used to occupy more than 100 million acres of the Great Plains, but development has decreased their area to less than 2,000,000 acres. They are sometimes seen as pests because of their burrowing habits, but they turn the soil, helping more than 170 vertebrate species to survive in the ecosystem.

The smallest mammals in the United States, pygmy shrews only weigh 2-4 grams and are 27-32 mm long, plus the tail. They live in forests from Alaska to Canada and into the Rocky Mountains and Appalachian Mountains, although they can also live in swamps, grassy clearings, bogs and floodplains. 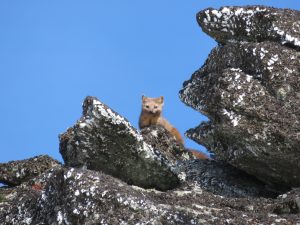 Martens are now found in Canada and Alaska and the northern United States mainly. Colonization changed their distribution, but they have been reintroduced in some areas where they were extirpated. The nocturnal creatures make their homes in tree crevices or hollows and prey on squirrels, mice or any other prey they can catch. 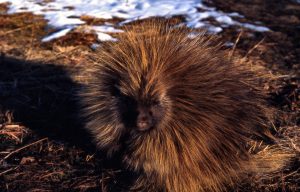 The second largest rodents in North America, behind beavers, porcupines weigh 5-14 kilograms. They are known for their 30,000 quills that have microscopic barbs on each tip to help them stick into their predators. They have long claws to help them climb trees when they live in forests, but they can also be found in open spaces and even deserts. Even their herbivore diet changes, dependent on where they live, but they need nitrogen sources in order to survive.

(Check out other ugly Iowa mammals)

Many people ask if the hedgehog animal ambassador at the Dickinson County Nature Center is related to a porcupine. However, hedgehogs and porcupines aren’t actually related at all. There are 17 different species of hedgehogs, and their closest relations are actually shrews and moles. There are more than two dozen species of porcupines in the END_OF_DOCUMENT_TOKEN_TO_BE_REPLACED

Kids learn pretty early that animals that are awake at night are nocturnal. The word for the rest of us that are awake during the day, though, doesn’t seem quite as well known. Humans and many animals are what is called diurnal. Diurnal creatures wake and sleep with the rising and the setting of the END_OF_DOCUMENT_TOKEN_TO_BE_REPLACED

Although creatures in the weasel family are often just called weasels, they are actually split up into a variety of species. You might be seeing an ermine, otherwise known as a stoat or short-tailed weasel, (Mustela erminea), the least weasel (Mustela nivalis) or a mink (Mustela vison). If you see one, though, how do you END_OF_DOCUMENT_TOKEN_TO_BE_REPLACED

1. Hollow hairs help them stay warm in the winter. Have you ever seen a deer that has snow on its back that doesn’t melt? It makes people shiver to think about walking around covered in snow — isn’t the deer freezing? However, it’s actually that frozen snow that shows just how warm a deer END_OF_DOCUMENT_TOKEN_TO_BE_REPLACED

The Iowa Great Lakes were formed as a result of glacial activity in the area. West Lake Okoboji is thought to have been created by the Wisconsin Glacier about 14,000 years ago as it retreated to the north. The Des Moines Lobe of the glacier is what covered Iowa and is what outlines Clear Lake, END_OF_DOCUMENT_TOKEN_TO_BE_REPLACED

Iowa is full of adorable mammals, so many that’s its hard to choose which are the cutest, but the state also has so uggos. Our environmental education coordinator likes to call these mammals non-charismatic, because ugly tends to turn people off. Although perhaps not the most attractive, the following mammals do still have a important END_OF_DOCUMENT_TOKEN_TO_BE_REPLACED

Mammals are usually the creatures that garner oohs and aahs when people see them on hikes, in their yards or even in zoos and conservation centers. They’re usually furry and cuddly with adorable eyes. (Some are ugly though — read about them here) Iowa has 57 different common mammal species, and some are charismatic while END_OF_DOCUMENT_TOKEN_TO_BE_REPLACED