We've all been outside drinking a pop at a picnic, when these little black-and-yellow creatures start flitting around and trying to get into the drink.

"Sweat bees," someone will say, shaking his or her head. "They're so annoying." 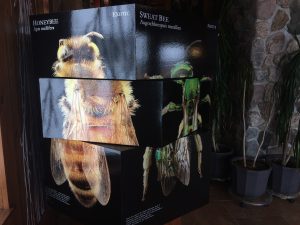 Doing a little more looking, what Iowans often deem sweat bees can actually be hover flies, which mimic bees through their coloring but are actually harmless flies, or sometimes more aggressive yellowjackets, which are also not bees but wasps. (Read about that here.) 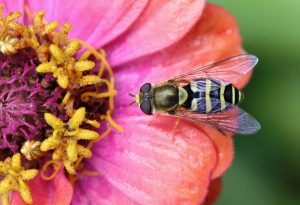 Real sweat bees are in the family Halictidae and predominantly aren't even black and yellow!

Let's start with metallic green sweat bees. These are found in the genuses Augochloropsis, Augochlorella, Augochlora and Agapostemon. Dependent on the species, these native bees may be all green, may have highlights of reddish-yellow and could even have a green head and thorax with a striped abdomen. A striped abdomen might be black and yellow, but it can also be black and white. 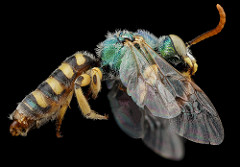 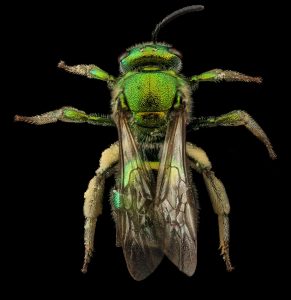 These bees are ground nesters --- except for Augochlora, which nest in rotting wood --- and great pollinators, collecting pollen on their hind femurs and tibia. They are generalist pollinators, which means they will forage on a variety of plants instead of a certain species. However, Agapostemon species do seem to like plants in the aster family in the summer and autumn. Augochloropsis also visit crops such as tomatoes, potatoes, eggplant and peppers. These flower require buzz pollination, and these bees have the ability to sonicate and release pollen from these flowers.

The term "sweat bee" came about originally from insects that fly around after sweaty people outdoors, trying to land on human skin to feed on sweat for salt and minerals. Bees in the genus Halictus do just that. These are true sweat bees, drawn to human sweat. 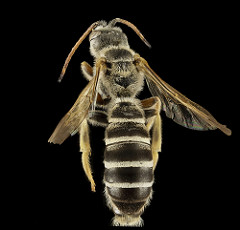 Halictus are small bees, about 7-13 mm in length.

They can bee solitary, communal or social, having been found to have social ground nests in warmer climates and solitary nests in cool climates.

These sweat bees are also generalist foragers, visiting a wide array of flowers throughout the summer months. They often like open flowers where pollen and nectar are easy to access, such as coneflowers, butterfly milkweed, goldenrod and asters.

There are approximately 10 species of Halictus in the U.S. and Canada.

This is a huge genus of native bees, with almost 300 species in the U.S. and Canada. They are considered small sweat bees, ranging in size from a tiny 3 mm to 10 mm.

Because there are so many species, the behaviors within this genus also vary. These small sweat bees can be solitary, primitively social or even social parasites --- meaning they invade nests and become the dominant egg-layer. They nest in the ground or in rotting wood, such as dead trees or logs lying on the ground. They also forage on a variety of plant species, from bloodroot and wild geranium to boneset, golden Alexanders and goldenrod.

Like in the Apidae family, the Halictidae family also has some annoying relatives --- cuckoo bees.

(Read about the Apidae family, which includes honeybees, here.)

Being cuckoo bees means that these bees do not have their own nests, instead laying their eggs in the nests of other bees. The Sphecodes female goes into the brood cell of another bee, destroys the host bee egg or larva and lays her own egg. The rest of the time, the adult bees forage for nectar, but they do not have any pollen-collecting structures.

Read the next in the native bee series: Mason bees are fantastic pollinators!

In the meantime, read how native bees differ from honeybees here!

Bees see the world much differently than humans. It’s not just because they are small but because they see different colors. On the color scale, humans can see the colors of the rainbow — red, orange, yellow, green, blue and violet. On one end, there is infrared, which humans can’t see, and on the other END_OF_DOCUMENT_TOKEN_TO_BE_REPLACED

One of our volunteers made coffee filter butterflies with her granddaughter, and in exchange, her granddaughter showed her how to make thumbprint bees. We thought they were so cute, we would try them ourselves. And just to make it more exciting, we did a variety of thumbprint invertebrates! All you’ll need is: White paper Washable END_OF_DOCUMENT_TOKEN_TO_BE_REPLACED

The mining bees in the Andrenidae family are incredibly gentle bees. According to “Bees: An Identification and Native Plant Forage Guide” by Heather Holm, a park in Minneapolis is the home to thousands of Andrena nests each year, but most people have no idea that they are walking right over them. These bees are solitary END_OF_DOCUMENT_TOKEN_TO_BE_REPLACED

Do you love blueberries? Then you should love the genus Colletes of native bees! These are one of several types of native bees that collect pollen from both highbush and lowbush blueberry flowers. Colletes validus has an elongated, narrow head that helps it fit into the tight flower opening where it eats nectar and collects pollen that will be transferred END_OF_DOCUMENT_TOKEN_TO_BE_REPLACED

Mason bees might be the best pollinators of all bees. Instead of wetting pollen and putting it in pollen sacs like honeybees, mason bees are covered in hair that collects pollen as they move around, searching for nectar. They can certainly carry a lot of pollen and significant pollinators for apple, cherry and plum trees. (Try END_OF_DOCUMENT_TOKEN_TO_BE_REPLACED

We’ve talked about the ways that native bees differ from honeybees (read that here) and how great of pollinators they are (read that here), but how do you identify native bees? There are seven known families of bees worldwide, and six live in North America: Andrenidae, Apidae, Colletidae, Halictidae, Megachilidae and Melittidae. The family Stenotritidae only END_OF_DOCUMENT_TOKEN_TO_BE_REPLACED

You can help native bees by providing them a secure place to nest. What many call bee hotels or bee homes range from simple to deluxe designs. (Mason bees are amazing pollinators.) One way is to drill various-sized holes into a wooden block or tree cookie and hang it in a sheltered area. Another simple END_OF_DOCUMENT_TOKEN_TO_BE_REPLACED

You have probably heard the long name neonicotinoids when the topic of struggling bee populations has come up. But what exactly are these chemicals, and what do they have to do with bees? This is a topic that is long, in-depth and still being studied, but we will do our best to break it down END_OF_DOCUMENT_TOKEN_TO_BE_REPLACED

Myth: Bees are mean. Truth: Bee are nice. Honeybees only sting as a last resort, because they die after stinging. That means, unless they feel threatened or think you are going to hurt the hive, they will leave you alone. Myth: Bees will keep stinging you. Truth: As stated above, honeybees will die after stinging END_OF_DOCUMENT_TOKEN_TO_BE_REPLACED