Last fall, when black and orange butterflies were fluttering all around the area, many people were so excited to see the masses of monarchs in their yards.

However, the butterflies weren’t actually monarchs. They were painted ladies.

We may think we know all there is to know about monarch butterflies, but sometimes we have more to learn than we realize.

(Test your monarch knowledge with this quiz.)

Painted ladies and monarchs are both in the same family, Nymphalidae, or brush-footed butterflies. There are 24 species from this family in Dickinson County. They are called brush-footed butterflies because they are known to stand on four legs while the other two are curled up, and those reduced forelegs have brush-like hairs in some species.

(Read part II of the butterfly identification series on sulphurs and blues.) 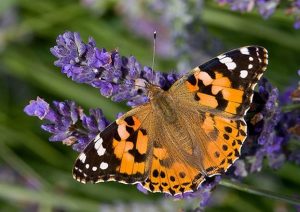 The painted lady butterfly is the most widely distributed butterfly in the world and migrates to Iowa from deserts in the southwestern United States and northern Mexico. It can be seen from May-September but is most commonly seen in September, which is why some people think it is the monarch butterfly. Their migration tables seem to overlap.

Instead of milkweed though, painted ladies caterpillars can be found on hollyhocks and thistles while adults drink nectar from tall verbena and coneflowers.

The monarch butterfly may be the most well-known butterfly because of its annual migration from overwintering sites in Mexico to the northern United States and Canada. It’s also becoming known for its drop by up to 90 percent in population in the past 25 years due to lack of habitat, food sources and increases in pesticide use.

The monarch butterfly will only lay its eggs on milkweed, and its caterpillars can only eat milkweed. The caterpillars absorb toxins from the milkweed plant, and these toxins would sicken birds, lizards and mammal predators. Because predators known they would get sick by eating them, it keeps monarch caterpillars safe. However, wasps and spiders are immune to these milkweed toxins.

Its adults also love butterfly milkweed nectar as well as feeding on nectar from showy goldenrod and rough blazing star. 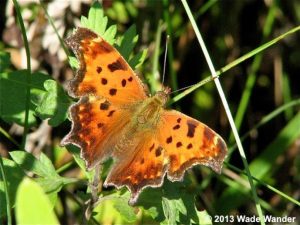 This butterfly might be one of the first that you spot each spring, as they actually overwinter as adults. A good place to look for them in the spring is a woodpile, because inactive adults sometimes spend their winters there. 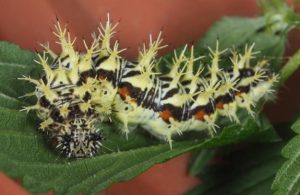 Their caterpillars are quite intriguing because they are covered in what appears to be horrible spines, but these white spines are actually harmless. You can find caterpillars on elm trees, false nettle and hop vines. 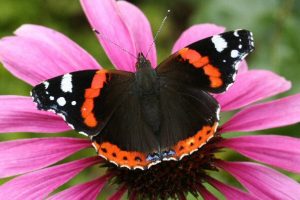 Red admirals also crave salt in human sweat and will stick close to humans in the garden.

(Moth or butterfly, can you tell the difference?)

Next week, we’ll go over some different types of moths you can see in Dickinson County. But in the meantime, download and print this free moth and butterfly field guide so you can be ready to identify these amazing insects when spring comes! 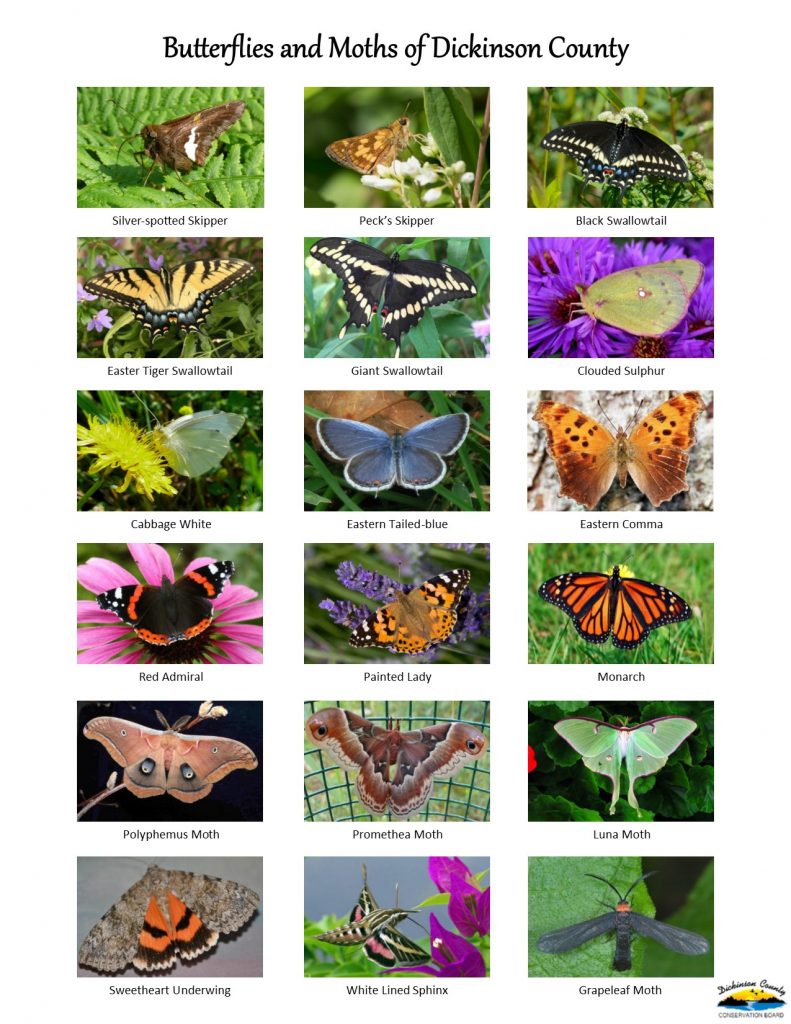