Besides their forked tongues, probably the main thing that creeps people out about snakes is their ability to move without legs or feet.

(The reason a snake sticks out its tongue, and why it's forked.)

I have to say, before I started working at the Dickinson County Nature Center, back when I was still petrified of snakes, I hated that about them. It's just so weird.

But often what is weird about an animal is really amazing.

(See a video about how the nature center snakes are fed.)

A snake's legless locomotion is possible because of its muscular body. To move, different parts of the body are at rest while others are lifted and pulled. Different locomotions are used to move on different surfaces.

Check out this graphic that has the muscles being used in each movement highlighted in blue. 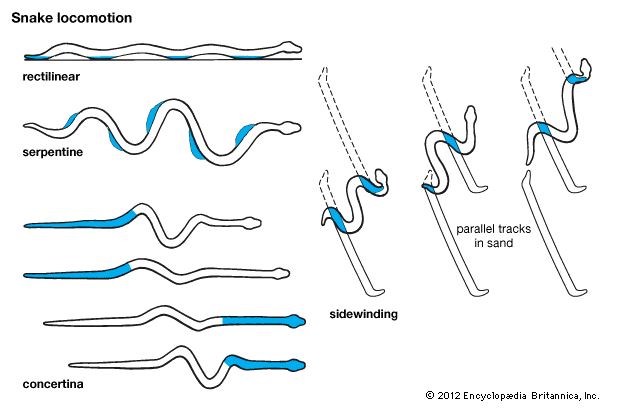 But their muscle movement goes beyond even those basics. A study at Georgia Tech in Atlanta, GA, looked at just how it is that snakes can move. Some had speculated that snakes needed twigs or rocks to push against, but you can see in the video of Itsy Bitsy the western fox snake at the Dickinson County Nature Center that she doesn't need anything to be able to slither around. Or think of the videos you've seen of snakes moving through sandy areas. They don't have anything to push off of either.

So researchers looked at how snake scales help these creatures move without the use of legs. They found that when sliding forward, snakes move easily. However, their scales resist moving backward or sideways.

But, in our video of Itsy Bitsy, she moves in a sidewinding pattern, easily moving from side-to-side. So how does she do that?

Well, researchers again noticed that snakes were moving their scales. Perhaps the muscles to each scale can help them move in such small ways that affect their movement. Or the study found that snakes lift parts of their bodies as they move, concentrating their weight or a few points and moving quicker.

Think of how we control our speed/stealth by the way we walk as well. We go on tip toes to be quiet, but that slows us down. When speed walking, we use much more of our feet.

So, yes, many people find snakes creepy because of how they move. But the fact that snakes can control their movement by using certain muscles, even down to activating different scales on their bodies, that really is quite amazing.

(See a video of the nature center snakes.)

Stop to learn about things that creep you out. You might find them amazing instead.

It just takes a couple of supplies you have around the house to create a new decoration for your room — a snake pendulum! You’ll need: A paper plate Crayons Scissors String Color both sides of your paper plate. Cut around and around from the edge of the paper plate to the center, from what END_OF_DOCUMENT_TOKEN_TO_BE_REPLACED

The common garter snake (Thamnophis sirtalis) is just that — common. They are a small snake, usually less than 3 feet, and are non-venomous. The snakes are found throughout Iowa and much of the U.S., as far south as the Gulf of Mexico. However common they are in the summertime, they quickly disappear as the END_OF_DOCUMENT_TOKEN_TO_BE_REPLACED

Just because they work for a conservation board doesn’t mean that naturalists know everything. Just last week, naturalist Ashley Hansen was feeding Rosie the corn snake when she noticed a hole open up in the snake’s mouth while it was eating a mouse — the Dickinson County Nature Center snakes are fed mice that are END_OF_DOCUMENT_TOKEN_TO_BE_REPLACED

If you find a snakeskin in the wild, it’s usually inside out! When it sheds, it slithers out of its old skin, like pulling a sock off your foot, so it ends up inside out! Watch the video for more information on how and why snakes shed their skin. Check out more of our animal END_OF_DOCUMENT_TOKEN_TO_BE_REPLACED

Crafts are so much more fun when the end result is actually something to play with rather than just hang on the refrigerator. This paper chain snake that can slither and wiggle is an easy and interactive craft for the snake lovers out there. And if you don’t have snake lovers, call it a caterpillar END_OF_DOCUMENT_TOKEN_TO_BE_REPLACED

Since this week’s blog post was about how snakes slither, I thought it only appropriate that this week’s craft also be snake related. I will pretty much guarantee that after you make this fun wrist cuff that your child will not take it off for the entire day. Or at least the next five minutes, END_OF_DOCUMENT_TOKEN_TO_BE_REPLACED

Why do snakes stick out their tongues at you? Have you ever seen this? You’ve been looking at one of the snake animal ambassadors at the nature center, and one of them sticks out her black tongue and flicks it around. She is smelling you! The snake’s tongue has a fork on the end of END_OF_DOCUMENT_TOKEN_TO_BE_REPLACED