It's such a common reaction when a buzzing insect comes near a person, whether adult or youth.

But the word "bee" is overused, and most people actually don't what insect they are encountering and why they usually shouldn't be afraid of it.

Last week, we talked about the difference between honeybees and native bees (click here to read that post), and as promised, this week we're going to delve into information on carnivorous bee-like insects.

You probably know these species as yellowjackets, hornets and wasps. Although there are many species of each, today I'll highlight a few that you might encounter in your Iowa yard. 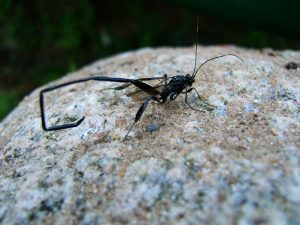 The long abdomen of this wasp is usually what terrifies people as it looks like it would extend its reach to sting. However, it is actually used to deposit eggs onto the backs of grubs in the ground. When the egg hatches, it will use the grub for food.

These wasps don't even sting. See, nothing to be afraid of! 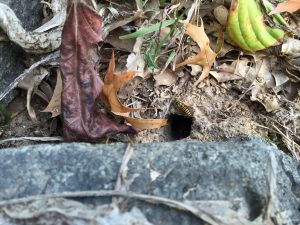 We get so many calls about aggressive honeybee hives nesting in the ground in a yard, because people mistake yellowjackets for honeybees simply because yellowjackets are also striped black and yellow.

There are many differences, but honeybees are fuzzy, have more brown than black and don't nest in the ground.

Yellowjackets are very defensive. They are carnivorous, so they don't lose their stingers and can sting repeatedly. They like sweet treats, so they are most likely what you see around your can of pop on a summer day.

If you see one, don't swat at it, because when in danger, a yellowjacket can release a pheromone that other yellowjackets can sense. Walk away! 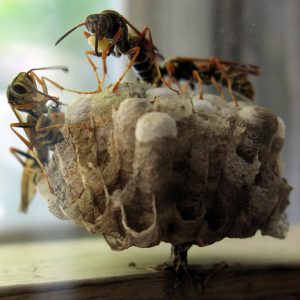 Paper wasps are often confused with yellowjackets because they have similar coloring. You will know them by the paper-like nests they make by chewing up soft wood and making a mash with their saliva, usually found under eaves and porch overhangs, in hollow places or in shrubs.

Paper wasps are carnivorous --- stinging insects, paralyzing them and bringing them back to the nest --- but they generally leave people alone unless their nest is disturbed. 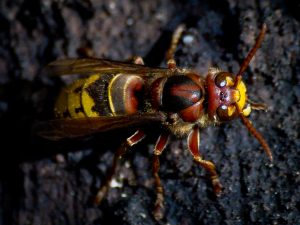 Technically the only hornet on the continent, this hornet is also an insect-eater. They are rarely found in urban areas but their paper nests can be found in hollowed trees, under porches in basements on under overhangs.

Like paper wasps, they will generally leave people alone unless disturbed. 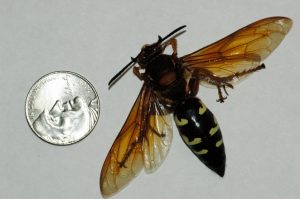 Named for their prey, cicadas, these wasps build their nests in the ground and lay eggs in underground tunnels. They will leave people alone in general but will sting if disturbed.

We’ve talked about the ways that native bees differ from honeybees (read that here) and how great of pollinators they are (read that here), but how do you identify native bees? There are seven known families of bees worldwide, and six live in North America: Andrenidae, Apidae, Colletidae, Halictidae, Megachilidae and Melittidae. The family Stenotritidae only END_OF_DOCUMENT_TOKEN_TO_BE_REPLACED

You can help native bees by providing them a secure place to nest. What many call bee hotels or bee homes range from simple to deluxe designs. (Mason bees are amazing pollinators.) One way is to drill various-sized holes into a wooden block or tree cookie and hang it in a sheltered area. Another simple END_OF_DOCUMENT_TOKEN_TO_BE_REPLACED

People often use the term bee when talking about any kind of buzzing creature outside — it could be a honeybee, a bumble bee, a mason bee, a sweat bee or even a wasp or yellowjacket. However, it’s important to differentiate between the different kinds of bees. That may be difficult since the U.S. has END_OF_DOCUMENT_TOKEN_TO_BE_REPLACED

You have probably heard the long name neonicotinoids when the topic of struggling bee populations has come up. But what exactly are these chemicals, and what do they have to do with bees? This is a topic that is long, in-depth and still being studied, but we will do our best to break it down END_OF_DOCUMENT_TOKEN_TO_BE_REPLACED

Be a bee! Learn how to make your own antenna

After Halloween, has your child been begging you to let him or her wear his or her costume again? Do they want to dress up every day? Here’s a fun craft to make that might curb their dressing up craving — bee antenna. You’ll need: A headband Four pipe cleaners Two beads Start by taking END_OF_DOCUMENT_TOKEN_TO_BE_REPLACED

Myth: Bees are mean. Truth: Bee are nice. Honeybees only sting as a last resort, because they die after stinging. That means, unless they feel threatened or think you are going to hurt the hive, they will leave you alone. Myth: Bees will keep stinging you. Truth: As stated above, honeybees will die after stinging END_OF_DOCUMENT_TOKEN_TO_BE_REPLACED

Read More
Posted in Blog, mobile and tagged afraid of bees, bees, black wasp, hornets, insects of iowa, iowa hornets, iowa wasps, iowa yellowjackets, native bees, paper wasp, wasps, what is in my soda, what kind of bee is it, what stung me, yellow jackets, yellowjackets