You have probably heard the long name neonicotinoids when the topic of struggling bee populations has come up.

But what exactly are these chemicals, and what do they have to do with bees?

This is a topic that is long, in-depth and still being studied, but we will do our best to break it down a little bit.

First, a neonicotinoid is an insecticide that affects the central nervous system of insects, causing paralysis and death.

Neonicotinoids include imidacloprid, acetamiprid, clothianidin, dinotefuran, nithiazine, thiacloprid and thiamethoxam. Check the labels of any of your gardening products for these chemicals.

The issue of neonicotinoids comes in when they reach beyond their intended targets. The insecticides can spread as dust, spray drift and can get into waterways where the chemicals are taken up by plants through their roots and spread into all plant tissues, including pollen and nectar.

The chemicals are very hardy, persisting in soil for years after application, in woody plants up to six years and some untreated plants will absorb residue from a previous year.

These residues are then consumed by pollinators, including honeybees and native bees.

This graphic, by the Xerxes Society, is very helpful in showing ways that neonicotinoids can affect foraging bees. 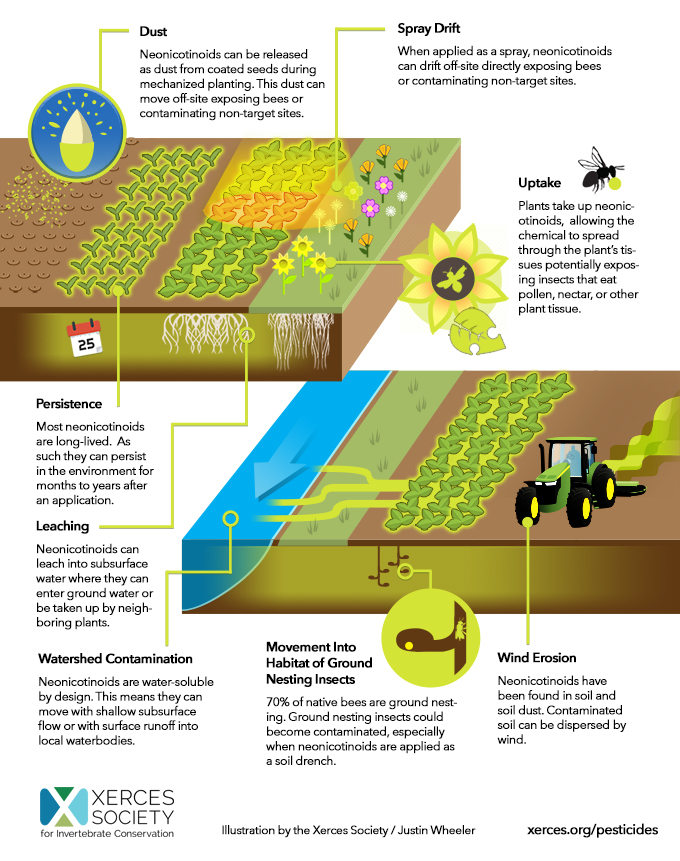 Neonicotinoids affect bees in a variety of ways. Clothianidin, dinotefuran, imidacloprid and thiamethoxam have been found to be highly toxic through contact and ingestion, while other varieties are considered moderately toxic.

Even when the neonicotinoids are not lethal, according to a Xerxes Society reportopens PDF file , they cause "problems with flight and navigation, reduced taste sensitivity, and slower learning of new tasks, all of which impact foraging ability and hive productivity."

It goes on to say "Larvae exposed to sublethal doses of imidacloprid in brood food had reduced survival and pupation, altered metabolism and reduced olfactory response as adults."

A Canadian study found that pesticides also impaired bee defenses. Normally, a bee colony will clean out its dead and sick brood to protect the healthy, but affected colonies stop taking these protective measures and sick bees stay in and infect the hive more often.

The same study also found that affected hives also tended to lose their queen and struggled to find a new one. And we all know, no queen equals no hive.

Neonicotinoids have also been found to impair native bumblebee and solitary bees such as the blue orchard bee and red mason bee, both of which are important pollinators.

(Read why mason bees might be better pollinators than honeybees.)

The issue with dwindling pollinator populations, from monarch butterflies to native bees to honeybees, goes beyond just one source though.

Our pollinators need more native habitat and food sources and less pesticides and fertilizers. The focus should be on restoring our environment to its natural state wherever we can, including adding native areas to our yards and gardens.

(Learn about five decorative milkweeds to beautify your yard.)

From contacting your legislators to encourage them to protect pollinators to taking measures to care for pollinators in your own yard to advocating for people to plant natives and use less chemicals in your area, you can make a difference in this issue.

(Read how honeybees survive the winter.)

All kids use pencils at school, but many times those pencils are plain yellow and don’t allow for much inspiration. We took pencils to the next level with our bee pencil toppers at the 2019 Bee & Butterfly Festival, and now you can make your own. Simply click here to download a free PDF template END_OF_DOCUMENT_TOKEN_TO_BE_REPLACED

Bees have so many issues to deal with. There’s a lack of nectar and pollen sources as wildflower populations diminish. Pesticides like neonictinoids are harming their nervous systems (read about that here). There’s unexplained colony collapse disorder. And then there are varroa mites. So many invasive species have caused catastrophic effects on different parts of END_OF_DOCUMENT_TOKEN_TO_BE_REPLACED

One of our volunteers made coffee filter butterflies with her granddaughter, and in exchange, her granddaughter showed her how to make thumbprint bees. We thought they were so cute, we would try them ourselves. And just to make it more exciting, we did a variety of thumbprint invertebrates! All you’ll need is: White paper Washable END_OF_DOCUMENT_TOKEN_TO_BE_REPLACED

Where is the queen is probably the No. 1 question that we are asked about the indoor bee hive. You can read a little bit about that here, but the next question often comes up as “What makes a queen bee?” The short answer is, queens are fed royal jelly which makes them different from END_OF_DOCUMENT_TOKEN_TO_BE_REPLACED

A few years ago, we saw a mass of bees collected around the hole that led outside from the indoor bee hive. We thought the bees might be swarming — leaving the hive, which usually occurs when there are two queens raised and one leaves with half the hive — and were nervous that there END_OF_DOCUMENT_TOKEN_TO_BE_REPLACED

A few years ago, we saw a clump of bees in the indoor beehive inside Pollinator Paradise at the Dickinson County Nature Center. They were linked together like a chain, hanging on to each other by their feet. Since then, we have seen this happen quite often, and visitors ask us what the crazy honeybees END_OF_DOCUMENT_TOKEN_TO_BE_REPLACED

You can help native bees by providing them a secure place to nest. What many call bee hotels or bee homes range from simple to deluxe designs. (Mason bees are amazing pollinators.) One way is to drill various-sized holes into a wooden block or tree cookie and hang it in a sheltered area. Another simple END_OF_DOCUMENT_TOKEN_TO_BE_REPLACED

Myth: Bees are mean. Truth: Bee are nice. Honeybees only sting as a last resort, because they die after stinging. That means, unless they feel threatened or think you are going to hurt the hive, they will leave you alone. Myth: Bees will keep stinging you. Truth: As stated above, honeybees will die after stinging END_OF_DOCUMENT_TOKEN_TO_BE_REPLACED