The caller on the phone had an excited lilt to her voice, the joy of seeing a snowy owl in Iowa. 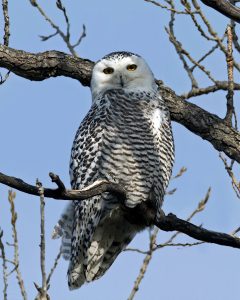 It seems that plenty of people have gotten to experience the excitement of seeing the largest owl, by weight, in North America. So far this winter, more than 160 snowy owl sightings have been reported to the Iowa Ornithological Union.

(See the map of sightings here.)

It seems rare to see this many snowy owls this far south, when usually Iowa only has 10 or so in the state, but the higher number this season is not all that uncommon. The populations of the owls grow in a cycle of every four to five years, and when populations boom there is not enough space in their southern migration grounds, so more end up traveling even farther south than usual to find food.

(Check out the landform regions of the state.)

You can see in this range map that Iowa is a part of the snowy owl’s typical winter range, and they can often be found along shorelines, near agricultural fields and by airports.

Although snowy owls are not completely uncommon in the state they still are a majestic bird that gets people out taking pictures and traveling long distances to be able to see one.

So what makes these birds such a draw?

(Read about what seed to feed birds in your yard.) 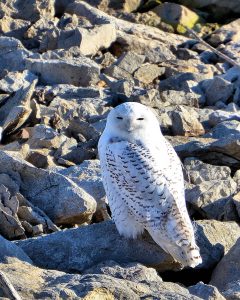 Probably the biggest draw to snowy owls is their bright, white feathers. Males tend to be whiter, while females will have more brown or black markings on their body and wings. Males will even become paler and whiter as they age.

Plus, snowy owls have bright yellow eyes, giving them an even more powerful and intriguing look. 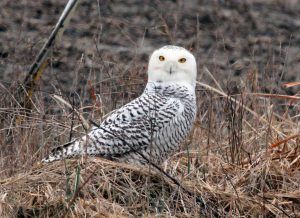 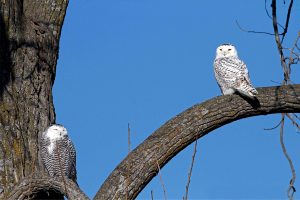 The snowy owl is also impressive because of its huge size. Adults typically weigh about 4 pounds, partially due to their thick feathers and fat that insulate them in the cold.

For reference, a great horned owl weighs about 3 pounds on average while a great gray owl — America’s tallest owl — weighs about 2 pounds.

Snowy owls are known as irruptive, appearing in some winters but not in others, and since they live in such remote areas and have huge territories it’s difficult for scientists to estimate their actual population size. Partners in Flight estimates a global breeding population of 200,000, with 24 percent wintering in the U.S.

(7 differences between osprey and bald eagles.)

Have you seen a snowy owl this winter? Let us know where and when!